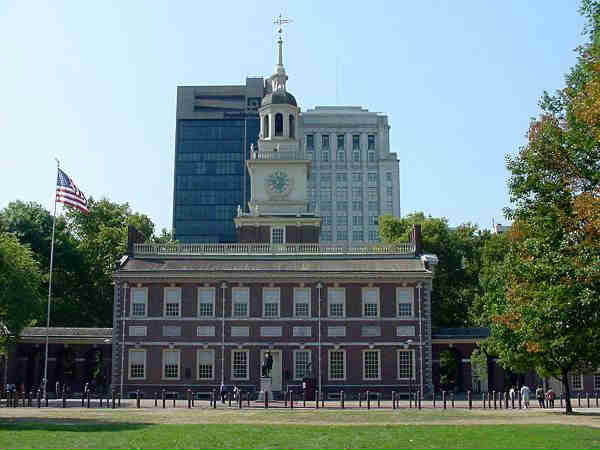 
Located in Philadelphia, Pennsylvania, Independence Hall was
built between 1732 and 1756 as the State House or capitol.
At this building, colonial leaders met to plan the future
of the new nation.

At Independence Hall, the Declaration of Independence was signed
in 1776, the Articles of Confederation uniting the thirteen
(13) colonies were ratified in 1781 and the Constitution
setting out the nation's basic laws was adopted in 1787.

The building was designed by Andrew Hamilton. Finished in 1753,
it is a brick structure with a steeple that was intended to
hold the Liberty Bell. The bell, however, has cracked twice
and stands silently on the ground in a special shelter
(a reproduction now hangs in the steeple). It was the home of
the Liberty Bell for over 200 years.

Independence Hall is important not for its architectural design
but for the documents drafted and debated here that formed
the democracy of the United States.

Back To Famous Places & Events