On a December night in Chicago many years ago, a little girl climbed onto her father's lap and asked a question. It was a simple question, asked in children's curiosity, yet it had a heart-rending effect on Robert May.

"Daddy," four-year-old Barbara May asked, "Why isn't my mommy just like everybody else's mommy?"

Bob May stole a glance across his shabby two-room apartment. On a couch lay his young wife, Evelyn, racked with cancer. For two years she had been bedridden. For two years, all of Bob's small income and smaller savings had gone to pay for treatments and
medication.

The terrible ordeal had already shattered two adult lives. Now, Bob suddenly realized the happiness of his growing daughter was also in jeopardy. As he ran his fingers through Barbara's hair, he groped for some satisfactory answer to her question.

Bob May knew only too well what it meant to be 'different'. As a child he had been weak and delicate. With the innocent cruelty of children, his playmates had continually goaded the stunted, skinny lad to tears. Later, at Dartsmouth, from which he graduated in 1936, Bob May was so small that he was always being
mistaken for someone's little brother.

Nor was his adult life much happier. Unlike many of his
classmates who floated from college into plush jobs, Bob became a lowly copy writer for Montgomery Ward, the big Chicago mail order house. Now at 33, Bob was deep in debt, depressed and sad.

Although, he didn't know it at the time, the answer he gave the little child on his lap was to bring him fame and fortune. It was also to bring joy to countless thousands of children like his own Barbara. On that December night in the shabby Chicago apartment,
Bob cradled the little girl's head against his shoulder and began to tell a story . . .

"Once upon a time, there was a reindeer named Rudolph, the only reindeer in the world that had a big red nose.

Naturally people called him "Rudolph, the red-nosed reindeer." As Bob went on to tell about Rudolph, he tried desperately to communicate to Barbara the knowledge that, even though some creatures of God are strange and different, they often enjoy the miraculous power to make others happy.

"Rudolph," Bob explained, "was terribly embarrassed by his unique nose. Other reindeer laughed at him; his mother and father and sister were mortified, too. Even Rudolph wallowed in self pity."

"Why was I born with such a terrible nose?" he cried.

"Well," continued Bob, "one Christmas eve, Santa Claus got his team of husky reindeer - Dasher, Dancer, Prancer, and Vixen, and the others -- ready for their yearly trip around the world.

The entire reindeer community assembled to cheer these great heroes on their way. But, a terrible fog engulfed the earth that evening, and Santa knew that the mist was so thick that he wouldn't be able to find a single chimney."

"Suddenly Rudolph appeared, his read nose glowing brighter than ever. Santa sensed at once that here was the answer to his perplexing problem. He led Rudolph to the front of the sleigh, fastened the harness and climbed in. They were off! Rudolph guided Santa safely to every chimney that night. Rain, and fog,
snow and sleet -- nothing bothered Rudolph for his bright red nose penetrated like a beacon."

"And, so it was that Rudolph became the most famous and beloved of all the reindeer. The huge red nose he once hid in shame was now the envy of every buck and doe in the reindeer world.

Santa Claus told everyone that Rudolph had saved the day, and from that Christmas on, Rudolph has been living serenely and happy."


Little Barbara laughed with glee when her father had finished. Every night she begged him to repeat the tale until finally Bob could rattle it off in his sleep. Then, at Christmas time, he decided to make the story into a poem like the 'Night Before Christmas' and prepare it in a booklet form with crude illustrations, for Barbara's personal gift.

Night after night, Bob worked on the verses after Barbara had gone to bed, for he was determined that his daughter should have a worthwhile gift, even though he could not afford to buy one.

Then, as Bob was about to put the finishing touches on Rudolph, tragedy struck. Evelyn May died. Bob, his hopes crushed, turned to Barbara as his chief comfort. Yet, despite his grief, he sat at his desk in the quiet, now lonely apartment, and worked on Rudolph with tears in his eyes.

Shortly after Barbara had cried with joy over his handmade gift on Christmas morning, Bob was asked to an employee's holiday party at Montgomery Wards. He didn't want to go, but his office associates insisted.

When Bob finally agreed, he took with him
the poem and read it to the crowd. At first the noisy throng listened in laughter and gaiety. Then, they became silent, and at the end broke into spontaneous applause. That was in 1938.

By Christmas of 1947, some 6 million copies of the booklet had been given away or sold, making Rudolph one of the most widely distributed books in the world.

The demand for Rudolph sponsored products increased so much in variety and number that educators and historians predicted Rudolph would occupy a permanent niche in the Christmas legend.

Through the years of unhappiness, the tragedy of his wife's death and his ultimate success with Rudolph, Bob May has captured a sense of serenity. And as each Christmas rolls around he recalled with thankfulness the night when his daughter's questions
inspired him to write the story.


In 1949, Robert's brother-in-law, Johnny Marks wrote the song, "Rudolph the Red-Nosed Reindeer," based on Robert's book.

Demo tapes were sent out to several singers, including
Bing Crosby and Dinah Shore. Gene Autry was included as an afterthought.


Autry had enjoyed a resounding success with "Here Comes  Santa Claus," which he co-wrote and recorded in 1947.

Seeking a follow-up Christmas hit, Autry selected three  songs for a four-song recording session. He passed over  "Rudolph," saying, "There are already too many reindeer flying around."

But Ina, his wife, liked the song. "Oh, Gene," she told him, "it reminds me of the story of the Ugly Duckling. I think you ought to give it a try. The kids will love it."

As time ran out in the recording session, Autry decided to go with the reindeer song. It was an "only take," and the payoff since for those few minutes has been phenomenal. 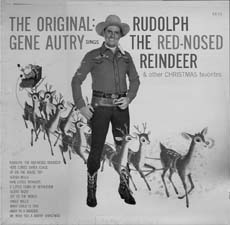 Autry recorded the song and by 1950 it was the most popular Christmas song on the radio. Within three weeks of its release,  Autry's "Rudolph the Red-Nosed Reindeer" hit the top of the charts.

"Rudolph the Red-Nosed Reindeer" sold two and a half million copies the first year. The song moved Autry onto the pop charts for the first time, and went on to become the second-best-selling single of all time behind Bing Crosby's "White Christmas." It was one of 16 songs named to the music industry group ASCAP's
All-time Hit Parade.


Marks became known as a Christmas composer and named his publishing company St. Nicholas Music, Inc. Marks wrote "Rockin' Around the Christmas Tree," "A Holly Jolly Christmas," "The Most Wonderful Day of the Year," and "I Heard the Bells on Christmas Day." Autry recorded several other Marks songs during the next decade, but none achieved the success of "Rudolph."

For children who may remember sitting on Santa's lap in 1939 at a Montgomery Ward store, telling the jolly gentleman their Christmas wishes, they left with a peppermint stick and a colorful story booklet named "Rudolph the Red-Nosed Reindeer

Montgomery Ward distributed 2.4 million copies of the booklet in 1939. By 1946, six million had been given away. May received a magnificent gift that year from Ward Chairman Sewell Avery---the copyright to "Rudolph the Red-Nosed Reindeer." May licensed the
character and organized Rudolph the Red-Nosed Enterprises, Inc. The company promoted a book, a technicolor cartoon, a Barnum & Bailey circus act, and other spin-offs. The little reindeer led May to financial security.


Back To Santa Claus  & Christmas Index 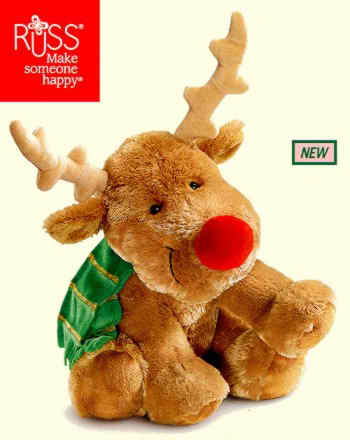 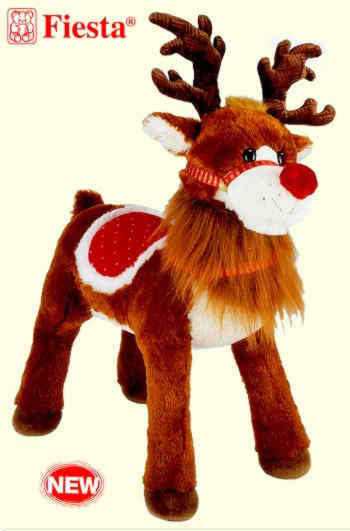