It's A Wonderful Life


Frank Capra's Merry Christmas To All
By: Jimmy Stewart

This story was originally published in Reader's Digest in December 1991.

This Christmas, a 45-year-old black-and-white movie I was lucky to have had a role in is lighting up television screens all over America, as it does every year. The name of the picture is It's a Wonderful Life, and it is one of the greatest, most popular movies of all time.

What accounts for the phenomenal success of a film about a small-town businessman who gets so desperate over losing what to him is a large sum of money that he thinks seriously about throwing away his life?

I think it's because, as the story unfolds, it becomes clear that It's a Wonderful Life is about hope, love and friendship. The film was produced and directed by
Frank Capra, the man I consider the greatest of all my directors.

Oddly enough, when It's a Wonderful Life first came out right after World War II, people didn't seem very interested in its marvelous story. Maybe they'd been through too much and weren't ready to watch a movie that asks the most fundamental of all questions: Is life worth living?

It nearly broke Frank's heart that audiences didn't rush to see the picture back then. "All that I was and all that I knew went into the making of It's a Wonderful Life," he said.

But I'm getting ahead of what I'd like to tell you. You see, you have to know Frank Capra's own story to understand why the movie is so great. What makes his pictures unforgettable came from Capra himself--out of his own wonderful life, with its unquenchable optimism and his belief that "all will yet be well."

First Grand Slam. Frank was born in 1897 in Bisaquino, Sicily, and celebrated his sixth birthday in the hold of a ship crammed with immigrants bound for America. After 13 days aboard, his father carried him on deck and pointed to the Statue of Liberty in New York Harbor. "Look at that!" he shouted. "It's the light
of freedom!" Frank never forgot that moment or what it meant to his family. 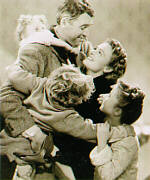 The Capras settled in Los Angeles, where Papa became a fruit picker and Mama a factory worker. Neither parent could read or write. But education, they decided, would be the key to success for the American Capras. So it was a momentous family occasion
when Frank, after only three months in his new land, was chosen to lead his school in pledging allegiance to the flag--in English! That day Frank Capra discovered what would later become one of the most important themes of his movies: "One nation...with liberty and justice for all!"

Frank took jobs before and after school and still got grades good enough to get into California Institute of Technology. There he earned a degree in chemical engineering. He also waited tables and, along the way, taught himself to play guitar. When he graduated in 1918, America was fighting World War I. With his
engineering skills in demand, he might have had a draft
exemption. But Frank enlisted in the Army and was assigned to teach mathematics to artillery officers in San Francisco. He ended the war with a severe case of influenza--and no job.

So he took his guitar and hopped freight trains to see America, singing for his supper. In December 1921, he was locked out of his San Francisco hotel room because he couldn't pay his $18 bill. A syndicate of bootleggers offered the young engineer
$20,000 to design alcohol stills. Frank turned them down flat.

Then he saw a want ad. A movie production company needed an experienced director. "I'm from Hollywood," Frank fibbed. He got the job--and later, ashamed, would apologize for lying.

Over the next decade, he made 22 films. He hit Hollywood's first grand slam in 1934 with a simple story of a spoiled rich girl who learns to appreciate ordinary people. It Happened One Night won
the five top Academy Awards--a record that remained unbroken for 41 years! 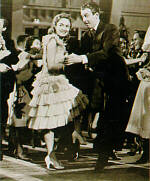 True Riches. By age 40, after he had won his second best-director Oscar, for Mr. Deeds Goes to Town, he was King of Hollywood. But Frank was no high-liver. When he wasn't shooting films, he was usually home with his wife, Lucille, and their three kids. They
were so happy Frank made up his own bedtime prayer: "Lord, help us all to be good and kind, and give us peace in our house and in all other houses."

I was wonderfully impressed by Frank's pictures. But we didn't know each other until he sought me out for the 1938 comedy You Can't Take It With You. I played a rich boy who wants to marry a poor girl. Jean Arthur played my fiancée, and her Grandpa
Vanderhof was played by that marvelous actor Lionel Barrymore. Lionel expressed Frank's contempt for people who value money and position over kindness and love for one's fellow man.

That film reflected two of Frank's strongest beliefs: "Love thy neighbor" and "The meek shall inherit the earth." Without preaching, his films showed that life's true riches lie in family, country and God.

Frank had watched fascism conquer Europe and worried about fascists trying to get power in America. "I'm a silly goose about things patriotic," he once wrote. He enlisted in the Army in 1941 and was asked to make documentary films. His Why We Fight series
became a part of the military training of every member of the armed forces. Gen. George Marshall personally pinned the Distinguished Service Medal on Frank for making those films. Afterward, Frank went into the first washroom he could find, locked a cubicle door behind him and cried like a baby.

Tale of a Lifetime. When Frank returned from the war, RKO studios handed him a short story called "The Greatest Gift," by Philip Van Doren Stern.

"Wow!" said Frank when he read it. "That's the story I've been looking for all my life." 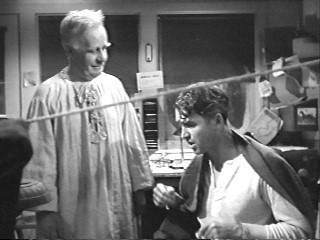 Frank came to see me and started telling me about it: "Now, you're in a small town," Frank said, "and things aren't going well--and you begin to wish you'd never been born. You decide to commit suicide by jumping off a bridge into a river--and an angel named Clarence comes down from heaven--and Clarence hasn't won
his wings yet, you see. But he comes down to save you by jumping into the river. But Clarence can't swim, so you save him."

And then Frank stopped dead. He said, "This--this story doesn't tell very well, does it?"

Well, I just said, "Frank, if you want to do a movie about me committing suicide with an angel with no wings named Clarence, I'm your man."

Frank had never worked on a story that meant so much to him. He changed the name to It's a Wonderful Life, and we started to shoot it in the spring of 1946.

Whenever Frank thought he had made a mistake, he'd go to great lengths to fix it. I remember the day we shot the scene where George Bailey, the film's main character and the part I played, having apparently misplaced $8000, huddles at Martini's Bar and
asks God for help. "Dear Father in Heaven," I say, "I'm not a praying man, but if you're up there and you can hear me, show me the way."

In the middle of praying, I was overcome with emotion and started to cry. Frank didn't know I was going to cry, you see. And neither did I. Afterward, Frank said, "I think I made a mistake, Jim. The camera was too far away when you cried. Do you think you could do it once more?" But because the emotion had been
spontaneous, I didn't think I could do it over again. 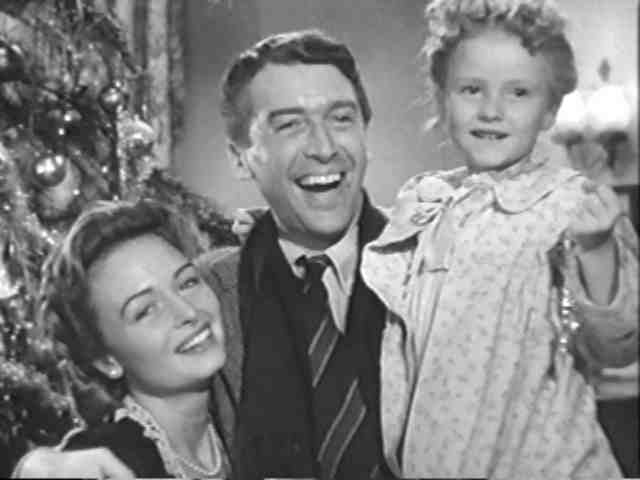 Frank said nothing more about it. But he stayed up that whole night enlarging every single frame of that scene--maybe 200 feet of film--on an optical printer. So when you see that close-up of me crying, it's not the camera moving in--it's a cut-in to that
painstakingly enlarged footage.

"My Memorial." One of the film's most memorable scenes is of family and friends gathering around the Bailey Christmas tree, helping George out by replacing the missing money. When we finished the picture, Frank expressed his hope that "it'll be a film that says to those who can't afford more education, or lose
their job, or take radiation treatments, 'You are the salt of the earth, and It's a Wonderful Life is my memorial to you. No man is poor who has one friend. Three friends and you're filthy rich!' "

The sad thing, as I said, was that right after the war people didn't want this story. They just wanted wild slapstick comedy, westerns, stuff like that. It took a while for the country to sort of quiet down. So It's a Wonderful Life got no Oscars and didn't do much business in 1946 and 1947, which meant the end of
Liberty Films, the independent company Frank had founded. It was one of the lowest lows of Frank's life.

Frank and I started getting the most amazing letters about the effect the film was having on people's lives. "I don't know if this means anything to you," many of them would begin, "but your film has been an inspiration to me." 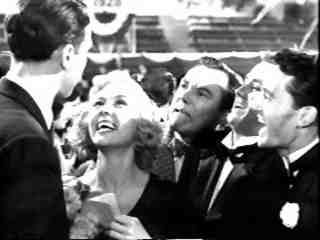 My wife, Gloria, heard about one man who tried to commit suicide and was given a videocassette of the film by his friends as a way of telling him, "Please don't--you've made a difference for good
in our lives."

Many writers have referred to the part in which Clarence the Angel tells George, "Strange, isn't it? Each man's life touches so many other lives, and when he isn't around he leaves an awful hole, doesn't he?" As columnist Don Feder of the Boston Herald
wrote: "In an increasingly impersonal world, this is an urgently needed message: that we count."

Frank died peacefully, in his sleep, last September 3 at his home in La Quinta, Calif. He was 94. I can't help thinking now that if Frank Capra had never lived, we would all be the poorer for not having his wonderful movie to celebrate every Christmas.

"What an idea!" I remember Frank saying when he first read the story on which his magnificent and enduring film is based. It's the kind of idea, he said, that people will remember and enjoy forever.


Read an article written by Jimmy Stewart about his making of the movie, It's A Wonderful Life, which appeared in GuidePost magazine.

Jimmy Stewart Talks About: It's A Wonderful Life

It's a Wonderful Life  premiered on December 20, 1946 at New York's Globe Theater as a
charity event. It received mixed critical reaction, however, it did received five 1946 Academy Award nominations in the following categories:


Although, It's a Wonderful Life did not win an Oscar, Frank Capra was awarded a Golden Globe in 1947 for Best Motion Picture Director on It's a Wonderful Life. It was also on the National Board of Review's list of the ten best films of 1947 and was
among the year's top grossing films.

It's a Wonderful Life (1946)
Directed by Frank Capra


Back To all about Christmas