The Legend of The Christmas Tree

Some say the modern day Christmas tree has its origins in the Pagan Yule celebration. Pagan families would bring a live tree into the home so the wood spirits would have a place to keep warm during the cold winter months. Bells were hung in the branches
so they could tell when a spirit was present. Food and treats were hung on the branches for the spirits to eat and a five-pointed star, the pentagram, was placed atop the tree.

Some say the Christmas tree story began in the 1300's in northern Europe, when performers strolled the streets bearing huge pine boughs laden with apples as walking advertisements for the miracle plays they staged on the church steps. The boughs represented the Garden of Eden in the play about Adam and Eve,
traditionally performed on Dec. 24th. Gradually this "paradise" tree, as it was called, transmuted into the tree of life--the Christ Child's tree

Another legend from the early days of Christianity in England tells the story of a Christian monk who was trying to spread Christianity among the Druids. One day, surrounded by a group of his converts, he struck down a huge oak tree, which, in the Druid religion, was an object of worship. As it fell to the ground, the
oak tree split into four pieces and from its center sprung up a fir tree.

The monk told the Druids, "This little tree shall be
your Holy Tree tonight. It is a wood of peace, for your houses are built of fir. It's the sign of an endless life, for its leaves are evergreen. See how it points toward the heavens? Let this be called the tree of the Christ Child. Gather about it, not in the wilderness, but in your homes. There it will be surrounded with loving gifts and rites of kindness."

One of the first written references to a Christmas tree was in 1605 , where a visitor in Germany reported seeing a tree decorated with apples, gilded candies, paper roses and thin wafers.

The rose was the symbol of Mary the Virgin; the wafer
represented the host of the Holy Communion, and the gilded candies were for children. The writer called the tree "Christbaum". Two hundred years later, it was brought to England by German Prince Albert, husband of Queen Victoria and found its way to the United States through German immigrants settling in
Pennsylvania who put up our first Christmas tree on December 20, 1821. 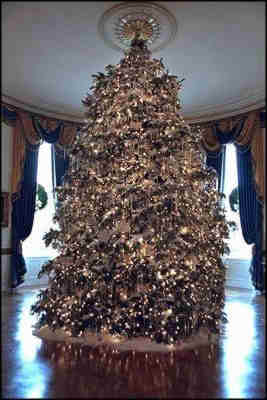 The Legend of Tinsel

The addition of tinsel as decoration comes from a legend about a poor old woman who was unable to provide decorations for her children's Christmas tree.

During the night, spiders lodged in the tree and covered it with their webs. The Christ Child, seeing
this, realized that the woman would be sad to see her surprise spoiled. He turned the spider webs into silver, and the next morning the poor family was dazzled by the brilliant "tinsel" that shone on the tree.


Tinsel was invented in Germany around 1610. At that time real silver was used, and machines were invented which pulled the silver out into the wafer thin strips.

Though it was durable, it tarnished easily, so some attempt was made to make tinsel with lead and tin. This proved too heavy and breakable, so silver was
actually used until the mid 20th century. Today, the tinsel we use is made of plastic.

The Legend of Holly

While many Christmas traditions have pagan origins, this secular little Christmas goody is steeped in Christian symbolism.


According to legend, a candy maker wanted to make a confection to honor Christ's birth. It had to be hard candy to represent the church being built on solid rock.

The Legend of Mistletoe

Also known as the golden bough, mistletoe was held sacred by both the Celtic Druids and the Norseman.
Celts believed this parasitic plant held the soul of the host tree, the holy oak. In a special ceremony, the Druid priests would harvest it with a golden sickle making sure it never touched the ground where it's magical powers would be absorbed back into the earth. The branches were then divided and distributed to the people who used it as a protection from all
sorts of evils.

Once called 'Allheal', it has been used as a folk medicine to heal toothache, measles, and many other ills.

The practice of 'kissing under the mistletoe' has many legends associated with it. Some say the Druids dedicated the plant to the Goddess of Love, and this is where the custom comes from.


Others claim it came from England, where mistletoe was hung in doorways for good luck. Since only happiness could pass beneath it, enemies would embrace and seal their peace with a kiss of
friendship.

Scandinavians also considered it the plant of peace,
and if enemies met by chance beneath it in the forest, they laid down their arms and maintained a truce until the next day. Even now, if there is armed conflict anywhere in the world, there is usually a cease-fire on Christmas Day, which is probably a custom
that has come down from these practices in antiquity.

My favorite legend comes from the ancient Norse people. In it, Frigga, wife of the god Odin, dearly loved her son Balder and took steps to make sure no harm would come to him by earth, fire,
water or air. Since mistletoe did not fit into any of these
realms, an evil spirit names Loki fashioned an arrow of it and gave it to Balder's blind brother, Holder. Guided by Loki's hand, Holder unknowingly shot his brother in the heart, killing him.

The legend has several outcomes. In one, Balder is brought back to life. In another, He was sent to the Otherworld with a Viking's funeral, on a burning ship, to await the day when He returns to Earth to usher in a new era. In both cases, Frigga swore that mistletoe would never again cause harm; making it a symbol of love and promising to bestow a kiss upon anyone who
passed under it.