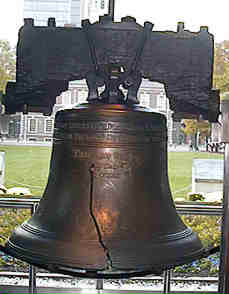 
Proclaim LIBERTY throughout all the Land unto all the
inhabitants thereof


The Liberty Bell's inscription conveys a message of liberty which
goes beyond the words themselves. Since the bell was made, the
words of the inscription have meant different things to different
people.

When William Penn created Pennsylvania's government he allowed
citizens to take part in making laws and gave them the right to
choose the religion they wanted. The colonists were proud of the
freedom that Penn gave them.

In 1751, the Speaker of the Pennsylvania Assembly ordered a new
bell for the State House. He asked that a Bible verse to be placed
on the bell - "Proclaim LIBERTY throughout all the Land unto
all the inhabitants thereof" (Leviticus 25:10).

As the official bell of the Pennsylvania State House (today
called Independence Hall) it rang many times for public
announcements, but we remember times like July 8, 1776
when it rang to announce the first public reading of the
Declaration of Independence.


The old State House bell was first called the "Liberty Bell" by
a group trying to outlaw slavery. These abolitionists remembered
the words on the bell and, in the 1830s, adopted it as a symbol
of their cause.

Beginning in the late 1800s, the Liberty Bell traveled around
the country to expositions and fairs to help heal the divisions
of the Civil War. It reminded Americans of their earlier days
when they fought and worked together for independence.

In 1915, the bell made its last trip and came home to
Philadelphia, where it now silently reminds us of the power of
liberty. For more than 200 years people from around the world
have felt the bell's message. No one can see liberty, but people
have used the Liberty Bell to represent this important idea.


A bell for the Pennsylvania State House was cast in London,
England, however, it cracked soon after it arrived in
Philadelphia. Local craftsmen John Pass and John Stow cast a new
bell in 1753, using metal from the English bell. Their names
appear on the front of the bell, along with the city and the
date.

By 1846 a thin crack began to affect the sound of the bell. The
bell was repaired in 1846 and rang for a George Washington
birthday celebration, but the bell cracked again and has not been
rung since. No one knows why the bell cracked either time.

The bell weighs about 2000 pounds. It is made of 70% copper,
25% tin, and small amounts of lead, zinc, arsenic, gold, and silver.
It hangs from what is believed to be its original yoke, made from
American elm, also known as slippery elm.


Back To Famous Places & Events Index