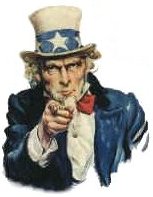 
Uncle Sam has come to symbolize the United States government
and the spirit of our country. The most famous picture of Uncle Sam
was first printed on a magazine cover in July of 1916. This
picture then became a popular Army recruiting poster during World
War I and again in World War II.


Through the years Uncle Sam has been portrayed by many artists,
illustrators, and cartoonists.

Certain characteristics however have always remained the same.
Uncle Sam is always shown wearing the United States' colors; red,
white, and blue. He is usually portrayed as a tall man with
white hair and goatee wearing a top hat.

Many believe that the character of Uncle Sam was based on Samuel
Wilson who lived in Troy, NY during the War of 1812. Samuel
Wilson was in the meat packing business. His company sold
barrels of beef and pork to the United States Army. These
barrels were stamped with the letters US to show that they were
to be used by the United States government. The residents of
Troy were proud of their local businessman, Samuel Wilson, and
his contribution to the US Army. They began to say that the
initials U.S. stood for "Uncle Sam" Wilson. As the nickname
spread, Uncle Sam became a popular symbol of the United States.
The United States Congress passed a resolution in 1961,
recognizing Samuel Wilson of Troy, NY as the man behind the idea
for Uncle Sam.


Back To Famous Places & Events