USS Constitution was one of six frigates authorized for construction by an act of  Congress in 1794. Joshua Humphreys designed them to be the Navy’s capital ships.  Larger and more heavily armed than the standard run of frigate, Constitution and her  sisters were formidable opponents even for some ships of the line.


Built in Boston of resilient live oak, Constitution’s planks were up to seven inches thick.  Paul Revere forged the copper spikes and bolts that held the planks in place and the  copper sheathing that protected the hull. Thus armed, she first put to sea in July 1798 and
saw her first service patrolling the southeast coast of the United States during the  Quasi-War with France.


In 1803 she was designated flagship for the Mediterranean squadron under Captain  Edward Preble and went to serve against the Barbary States of North Africa, which were  demanding tribute from the United States in exchange for allowing American merchant
vessels access to Mediterranean ports.


Constitution patrolled the North African coast for two years after the war ended, to  enforce the terms of the treaty.


She returned to Boston in 1807 for two years of refitting. The ship was recommissioned  as flagship of the North Atlantic Squadron in 1809 under Commodore John Rodgers.


By early 1812, relations with Great Britain had deteriorated and the Navy began  preparing for war, which was declared June 20. Captain Isaac Hull, who had been  appointed Constitution’s commanding officer in 1810, put to sea July 12, without orders,
to prevent being blockaded in port. His intention was to join the five ships of Rodgers’  squadron.

Constitution sighted five ships off Egg Harbor, N.J., July 17. By the following morning the  lookouts had determined they were a British squadron that had sighted Constitution and  were giving chase. Finding themselves becalmed, Hull and his seasoned crew put boats
over the side to tow their ship out of range. By using kedge anchors to draw the ship  forward, and wetting the sails down to take advantage of every breath of wind, Hull  slowly made headway against the pursuing British. After two days and nights of toil in the
relentless July heat, Constitution finally eluded her pursuers.


But one month later, she met with one of them again — the frigate Guerriere. The British  ship fired the first shot of the legendary battle; 20 minutes later, Guerriere was a dismasted  hulk, so badly damaged that she was not worth towing to port. Hull had used his heavier  broadsides and his ship’s superior sailing ability, while the British, to their astonishment,  saw that their shot seemed to rebound harmlessly off Constitution’s hull — giving her the
nickname 'Old Ironsides'.


Under the command of William Bainbridge, 'Old Ironsides', met Java, another British  frigate, in December. Their three-hour engagement left Java unfit for repair, so she was
burned. Constitution’s victories gave the American people a tremendous boost to morale,  and raised the United States to the rank of a world-class naval power.


Despite having to spend many months in port, either under repair or because of  blockades, Constitution managed eight more captures, including a British frigate and sloop  sailing in company which she fought simultaneously, before peace was declared in 1815.
After six years of extensive repairs, she returned to duty as flagship of the Mediterranean  Squadron. She sailed back to Boston in 1828.


An examination in 1830 found her unfit for sea, but the American public expressed great  indignation at the recommendation that she be scrapped, especially after publication of  Oliver Wendell Holmes’ poem 'Old Ironsides'. Congress passed an appropriation for
reconstruction and in 1835 she was placed back in commission. She served as flagship in  the Mediterranean and the South Pacific and made a 30-month voyage around the world
beginning in March 1844.


In the 1850s she patrolled the African coast in search of slavers, and during the Civil War  served as a training ship for midshipmen.


After another period of rebuilding in 1871, she transported goods for the Paris Exposition  of 1877 and served once more as a training ship. Decommissioned in 1882, she was used  as a receiving ship at Portsmouth, N.H. She returned to Boston to celebrate her centennial  in 1897.


In 1905, public sentiment saved her once more from scrapping; in 1925 she was restored,  through the donations of school children and patriotic groups. Recommissioned in 1931,  she set out under tow for a tour of 90 port cities along the Atlantic, Gulf and Pacific coasts  of the United States.


More than 4,600,000 people visited her during the three-year journey. Having secured  her position as an American icon, she returned to her home port of Boston. In 1941, she was placed in permanent commission, and an act of Congress in 1954 made the Secretary of the Navy responsible for her upkeep.


Now the oldest U.S. warship still in commission, Constitution remains a powerful reminder of the nation’s earliest steps into dominance of the sea. 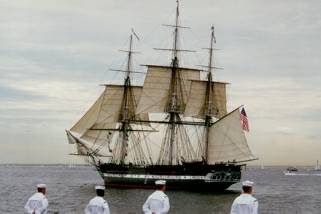 By Oliver Wendell Holmes
September 16, 1830
Ay, tear her tattered ensign down!
Long has it waved on high,
And many an eye has danced to see
That banner in the sky;
Beneath it rung the battle shout,
And burst the cannon's roar;--
The meteor of the ocean air
Shall sweep the clouds no more.

Her deck, once red with heroes' blood,
Where knelt the vanquished foe,
When winds were hurrying o'er the flood,
And waves were white below,
No more shall feel the victor's tread,
Or know the conquered knee;--
The harpies of the shore shall pluck
The eagle of the sea!

Oh, better that her shattered bulk
Should sink beneath the wave;
Her thunders shook the mighty deep,
And there should be her grave;
Nail to the mast her holy flag,
Set every threadbare sail,
And give her to the god of storms,
The lightning and the gale!

Back To Famous Places & Events