You wouldn't believe the advances that are now occurring in
of all things cat litter technology. Yes that's right, cat
litter has now become a technology that is progressing and
making a substantial amount of money. From cat litter boxes
that automatically clean themselves to cat litter that
doesn't smell or leave urine waste sitting in the pan.

One of the first cat litters ever developed was "Kitty
Litter," which became available in 1948. Prior to this time
sand had been used in litter boxes, but "Kitty Litter" was
made with clay. The new clay litter was more absorbent than
sand and its larger grain made it less likely to be tracked
from the litter box. The brand name has grown to be commonly
used as a generic noun that denotes any type of cat litter.

From there, cat litter companies went on to add deodorizers
to the cat litter so that the urine and feces smell became
less and less noticeable. There currently is a new type of
cat litter on the market that will absorb your cat urine and
leave no clumps to scoop out or any urine smell. It
effectively locks away the urine altogether and leaves no
noticeable scent. It still needs to be changed once a month
for health reasons and removal of feces.

Cat litter has come such a long way from the sand, ash or
wood chips used fifty years ago that you can find just about
any type of cat litter you want. Cat litter is now made from
clay, crystal, sand, grains, corn cobs, paper, etc. Most of
it has odor control, is biodegradable and easy to clean up.

Then we have the cat litter box, which used to be any old
container that wouldn't leak the urine out when the cat used
it. Now cat litter boxes are made with high tech plastics
with or without covers, and even electronics.

Then there are the automatic cat litter boxes that clean
themselves right after the cat uses the box, safely stowing
the waste and mixing the cat litter for maximum absorption
of urine. The boxes still have to be cleaned and
disinfected every month, and clumping cat litters work best
with this type of cat litter box, but it is amazing that
essentially the cat now has a functioning waste management
system much like a human's toilet.

And still they are making more and more advances in this
area. This technology has made owning a cat not only a
pleasure but a convenience, and improves the relationship
between pet and owner.

Make a Huge Difference in your Cat's Health - Find Out!

These cats certainly aren't spoiled, now are they? 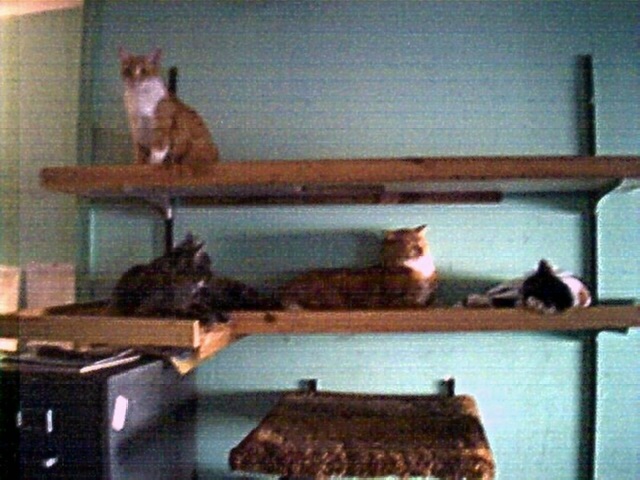