What makes a Cat be a Cat?

One of the reasons cats tend to elicit strong feelings in people takes the form of this species many unique characteristics.

People who expect cats to act like humans, little dogs, or all other domestic animals often find these differences difficult to deal with or even intolerable. On the other hand, those who enjoy novelty find cats most enjoyable, if sometimes maddening, animals with which to share their homes.

Although all domestic animals possess behaviors that make them unique, cats offer the added challenge provided by their status as our most recently domesticated species.

In fact, judging by the numbers of feral cats (domestic animals gone wild) whose numbers some estimate equals the almost 60 million pets in our homes, we might even argue that the cat isn't domesticated at all.

On the other hand, if we look at some of the purebreds which are even newer entries in the domestic cat scene, some of these appear so fragile as to make their survival outside the most highly controlled environment questionable. But that, too, is typical for the cat: For every extreme one cat presents, we can find another cat displaying exactly the opposite!

Because cats are so much closer to their wild roots than dogs or any other domestic animal, a lot of seemingly incomprehensible feline behaviors make more sense if we understand where the cat is coming from.

Most scientists agree that today's pet cat descended from a small African wildcat, Felis silvestris libyca; the term wildcat is used to differentiate the small cats from the wild cat group which contains all wild felines.

One way a small creature can insure its own food supply at the same time it decreases its own chance of being eaten, is to seek food when others aren't, such as at night. Cats adopted this nocturnal strategy and can function very well in restricted light or even in what we humans would consider total darkness.

While hunting at night does confer some benefits, it's not completely without problems. First, while the approach does limit encounters with diurnal (daylight-active) predators, it doesn't rule out predators completely.

Imagine yourself a small hunter hunting in the tall grasses and forests in minimal light to total darkness at the same time some other animal may be hunting you. What kinds of characteristics would help you protect yourself?

First, you might want to start out with some sort of camouflage. For the cat who hunts in tall grass, brush, and forest, a nice tabby pattern that gives the illusion of light shining through vegetation does a most effective job of hiding it.

Second, a keen sense of hearing would be a big advantage when locating food or keeping track of predators at night.

Third, color and detail vision won't help a lot in the dark, but eyes that could make the most of what light is available as well as those which are sensitive to the slightest motion would be a real plus.

In addition to all of this marvelous dark-adapted physiology, the cat needs some way to move swiftly through its territory on even the darkest night to escape predators and other threats if necessary. To that end, cats lay down scent trails using the scent glands on their feet, plus secretions from similar glands on the sides of the face and head to mark prominent objects along that path.

In some wild animals, these scents serve as such potent markers that, if an animal accidentally veers when laying down the original trail, it will veer at that same point every time thereafter. In this manner the cat lays down a trail that has as much meaning to it as a trail of lights through the forest would have for us.

The good news about scent marks is that they can communicate their message on the darkest night as well as brightest day, and these messages last much longer than sounds which might also alert predators.

The bad news is that the cat periodically must freshen up those marks as well as mark off any new additions along the trail—which probably explains the reason for the cat's well-know curiosity.

After a storm, the resident cat who doesn't check out his territory and mark off any downed branches or other new obstructions in his path could find himself in deep trouble when he encounters these for first time, unmarked and in the dead of night, while trying to flee a predator.

Given the critical role scent marking plays in the small wildcat's survival, we can understand why cats are also extremely territorial. Because they must refresh these marks periodically and there are so many hours in a day (even though cat-hours might not be quite the same as ours!), cats who spend all of their time policing up a large territory won't have any time left to find food and water and reproduce and, hence, will be eliminated from the gene pool. On the other hand, the cat who claims just enough territory to support himself (or herself and her kittens) will be able to achieve these goals more readily.

So now we have a relatively small creature who hunts and is being hunted at night in an area just big enough to fulfill its needs. Given its dependence both on that territory and those scent cues for its survival, we can also appreciate why cats are solitary rather than social animals under such conditions. They can't afford to share their space with other cats for two critical life-saving reasons.

There's not enough food.
The scent trails of other cats could confuse the resident cat. From this, we can see why it makes terribly good sense for a cat to be nocturnal, predatory, territorial, and solitary. But what could possibly explain the feline maternal nature that distinguishes it from all other domestic animals, too?

The answer to that question also lies in the domestic cat's heritage. Like all other animals, the goal of a mother cat (or queen), is to get her genes into the gene pool, which means doing everything possible to insure her young survive.

However, unlike social species who can rely on other pack members for assistance throughout life, the cat has no such luxury. The queen much teach the kittens everything they need to know to survive on their own. Not only that, she must do this before the kittens' food requirements exceed the limits of the territory. That means she must teach them a great deal in a very short time, and they must possess the capacity to learn all this. Needless to say, a very strong maternal bond comes in handy when fulfilling such a tall order.

Similarly, an animal which experiences a solitary existence on a fixed territory with a limited food supply faces special challenges when it comes to finding a partner. An animal which doesn't particularly enjoy hanging out with its own kind—and may even views them as a threat—obviously needs a little extra incentive when it comes to mating, as well as physiological and behavioral adaptations to enable them to make the most of feline breeding season.

We need only look at the alarming rate at which the small wildcat populations are disappearing worldwide to appreciate how difficult it is for these species to maintain their numbers in a shrinking habitat. Ironically and sadly, more numerous domestic cats who compete for food, breed with wildcats thereby diluting their already shrinking gene pool, and expose them to disease also contribute to the problem.

To summarize then, five behaviors make cats cats: They're nocturnal, territorial, solitary, predatory, and maternal. And because cats are so newly domesticated, we can be sure these same behaviors influence our pets every bit as much as they did their ancient ancestors. 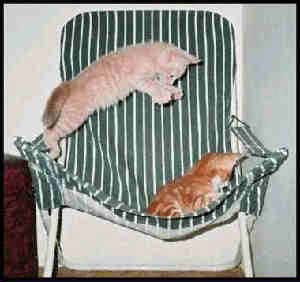 Is your kitty "On Edge"?

Why let your kitty suffer from those agonizing
veterinarian visits when their is a very reasonable
solution to keeping Mr. or Mrs. Cat very calm,
cool and collected and doing it in a safe manner.

We would like to introduce to you a product that
has helped thousands of anxious cats become calmer.

It's called Mellow Out.

Lots of Meows and tail swishes to my fellow feline friends.

As senior editor of the Cat Care section of this web site,
I would like to introduce to you one of the most amazing
feline care products I've ever run into.

This Premium Feline Food is what I devour every day, simply
because it's so Nutritious and So Very Tasty. Your kitty will
also totally fall in love with this food, and you will be totally
surprised at what a much healthier kitty you now have on your hands.