Please Help Pets with a Small Gift of Only One Dollar

What does it mean when your Cat Purrs?
By: Alfred


If you are an experienced cat person you will know that a
cat doesn't just purr when it is being petted, cats will
also purr when there is some kind of traumatic or tense
moment, and even when they are injured or at death's door.
Purring is a mechanism for the cat to express itself and for
even more amazing reasons.

Cats have been known for their remarkable endurance. When a
trauma occurs to a cat they are stoic about it, according to
most veterinarian professionals. Cat's purr under stress and
most of the time this is considered to be a soothing,
healing, relaxing sound not only to them but to others.

Those involved in the study and practice of holistic healing
say that the Hertz of a purring cat lies between twenty-five
and one hundred fifty. There is ongoing research, but some
studies have shown that these sound frequencies may be able
to stimulate healing and bone growth in other animals and
humans.

The most common scientific opinion is that when a cat purrs
it activates nerve endings within the voice box that vibrate
the vocal cords and create the purr that we all know and
love to hear from our kitties. A smaller percentage of
scientists believe that the sound is caused by vibrating
blood vessels within the voice box itself. Most
veterinarians consider this to be a voluntary act and cats
appear to purr when they want to purr.

Every domestic cat has the ability to purr providing there
isn't some kind of genetic defect of the voice or trauma to
the neck. A mother cat, or queen, will purr while giving
birth. Kittens purr while nursing at the mother cat, and the
mother cat will purr right back at the nursing kittens. Your
cat will purr just because you are in the same room, let
alone when you are petting it or brushing it.

Cats have been used in healing therapies in hospitals
because of that marvelous purr. Some cats even go around
with their owners to retirement communities and cheer up the
inhabitants. In fact, some nursing homes are now adopting
resident cats because of their positive effect on the mood
of the human residents. The feline human bond is remarkable
and reinforced when a cat purrs. The response to this type
of healing is remarkable. 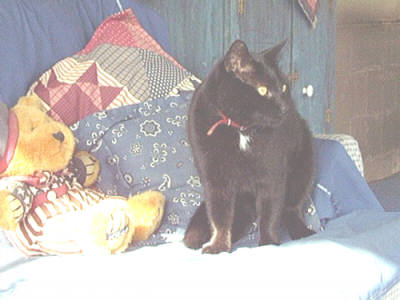 Get your Kitty some New Up and Go