Please Help Pets with a Small Gift of Only One Dollar


Lasher
An Open Letter to a Non Pet Owner

To whom it unconcern,

To say it was only a cat to one grieving the loss of one
is not a comfort. One would not say to parents grieving the
death of a child, "it was only a kid." To those of us who,
unfortunately or fortunately, as the case may be, do not
have two legged children sometimes use their pets, four
legged, feathered or finned to fill that void. In my case, I
own cats or should I say one cat as I just euthanized my
twenty year old cat Tigger. To the person who said, "she was
twenty, she had a good run, it's time to put her to sleep,"
how would you know? You didn't live with her sweet face or
kitty cat kisses. The pain of her death hurt me as much as
the death of a nephew.

Now we are on food stamps and I am told I should get rid of
my remaining cat. He prefers my food to his and I am more
than happy to share with him. Should a person in the same
situation be told to leave their ten year old child by the
wayside? When someone says get rid of him, you can always
get another cat, I know I am listening to a non pet owner.
He can not be replaced like a piece of furniture. I do not
want another cat. I want the cat I now have. We also lost
our house and looked into a hotel suite. Not sweet for a cat.
So now we are in a- Thank you for allowing cats- Motel 6.
The money is soon to run out and They say our only option is
a shelter. No shelter for our cat. But there are always
other options. I will sleep in my car if that is the only
way I can save my last "child".

My story begins on August 1st when Peanut was born to a
friend's cat. I had to take care of the kittens until my
friend got her own apartment. I will shorten it for
everyone, I found a home for one of the grey males and the
other 5 were to go to a pet store to be sold.

The man on the phone told me he couldn't take Peanut because
her front paws were broken during birth. He was going to put
her to sleep. I talked my husband into letting me keep her.
With the other 13 cats we have he was a little reluctant,
but he caved in and said yes.

I think she is very unique because I really didn't want
another cat but I think deep down she chose me. She is
double-pawwed, and has five toes on her back feet.

I feel very blessed to be chosen by this very special
kitten.
Peanut and her very proud Mom Debbie 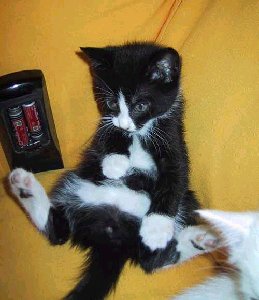 Sit Back and Enjoy Your Reading

Dusti is our 1st baby! I got her when my husband and I were
just living together and I begged for a cat!

She is a frisky cat that loves to play w/my husband but no
one else! That is until I had my Second Baby Joshua. Then
I think dusti felt she had to fight for affection but she
didn't.

I have two children Marissa and Joshua and they love to play
w/her! Dusti Just lays down and lets them pat her until
she's fed up and then nips but not to hard just enough to
let them know she's had enough!

Dusti is a very sweet cat but she has a bare belly and she
is biting the hair off her paws! She has allergies But we
can't quite figure what to.

Its quite funny to see her sit like a human and her belly
hangs out! She has been a lot more loving since we have
been talking about getting a dog! I wonder if she knows what
we are actually talking about or if it was just weird that
she started getting more snuggley after we mentioned a dog!
Any ways that's my wonderful Maine coon cat Dusti!

Back in 1984, I was at a Mobil gas station pumping gas when
I heard a tiny pathetic mew. I followed the sound and
discovered a very small kitten in an uncovered oil drum
filled with used oil.

I pulled it out and rushed it home, gave it a bath with No
More Tears baby shampoo. I didn't have the money to take it
to a vet, so I force fed it a little water and baby food
(beef).

I was up all night with "Scoots" and took him to work with
me. My employer was kind enough to let me keep it in a home
made bed by my desk. I gave him so many mini baths because
he soiled himself, constantly.

The following week I took him to a vet. He told me to put
him to sleep. That was not an option.

Two weeks later he graduated to boiled rice and hamburger.
He still couldn't eat on his own so I fed him and continued
taking him to work with me for the next two months.

Scoots had many health problems in the first two years of
his life but I think he always recovered because he knew how
much I loved him.

Friends and family said I was setting myself up for
heartache from day one but to this day I've never had a more
faithful friend. He never scratched furniture or carpets,
he always came when I called him, sat on my lap and soothed
me and when I lost my fiancé to a heart attack no one could
comfort me except Scoots.

Scoots lived until January 1999. He developed cancer and
after many visits to the vet to prolong his life, I sent him
to his much deserved resting place.

He enriched my life and made me realize that love and care
makes all the difference.

Thank you for Dr. Jane's story and allowing me to tell mine.
I've got three cats today and only feed them homemade food
and supplement with vitamins. Calle' 14 years, Pilot 3 years
and Shadow 1-1/2 years are very healthy and happy indoor
kitties. I now have health insurance for them so if I must
take them to the vet money is not any issue.

God Bless you all,
Carolyn


Jack: this Cat rules the Roost 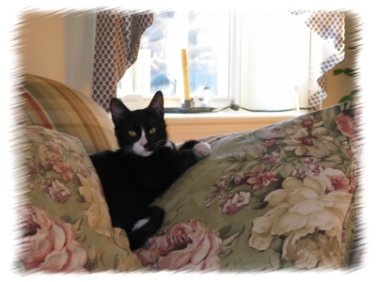 Dixie is a beautiful gray & white longhaired cat. I'm proud
to say that she just over two years old now. When we first
met in Nov. 2000 she was a mere ten weeks old.

As my friend’s daughter was taking her usual short cut from
her best friend's house to her own back yard, it started to
rain. She passed a recently vacated house and heard the
distinct crying of young kittens. Upon investigating she
found three kittens in a box in the back yard of the vacant
house. She brought the box and it's contents home.

I was there when she got to her house. She came in and
said, "Look what I found."

I looked in the box at the three tiny wet kittens, and I saw
Dixie for the first time. I immediately said, "The gray &
white one is going home with me." My friend and her
daughter claimed the other two.

Dixie is a very healthy 13lb. cat. At this time, I claim
she's my hairy child. And yes, she is a big baby; she
sleeps beside me every night.

She talks to me all the time. If I'm outside she will sit
in the window and "Meow" at me. She will wake me up in the
middle of the night if she can see the bottom of her food
dish, even if her bowl is over half full.

Bart, Who could ask for anything more?
David Glasgow

Bart came to me when I first moved here. I had just rented a
new apartment and had no plans for pets this time. Night
after night, I heard this poor wailing coming from across
the street. After two weeks or so, I finally walked over
during the daytime to see what the noise was about.

What I saw broke my heart. Five starving kittens on a broken
down porch. No mother anywhere to be seen. The owners of the
apartment came out and told me to take them, they were ready
to drown them they were so noisy. I picked up all five and
put them in my Knapsack. I went door to door until I found a
home for all but one. No one seemed to want him.

I relented and brought him home with me (just for a day or
two), I thought. I fed the kitten and put him in a warm
quilted box. During the night, the cries started. Oh no, I
said, I am a single male and this is not fitting my dating
scene. I went and got the kitten out of the box and brought
him into bed with me. He was the size of a fist.

When I awoke, the kitten had his tiny paw around my neck and
was purring, probably for the first time, in my ear. I was
hooked. This little black bundle of joy loves to run now but
always comes into my room at night and lays down on his own
special pillow I bought. He always wakes with me and seems
to smile, as if saying "ready for another day".

I named him Bart after the Simpson cartoon character as he
likes to get into trouble. But, whenever I need that paw
around my neck, that purr in my ear, Bart is there. I will
always look for animals in need because of Bart, and never
say no to another animal in distress. Bart taught me that
life is a chaos, but at night, we all dream of better
things. I love Bart and I know he loves me too. Can you ask
for anything more?

==> From one feline to another, I really want you to
experience this delightfully Purr-fect dining ecstasy
in your next food bowl.