Most of us consider our dogs to be members of the family,
which makes it easy to forget they have different dietary
needs than we do.

Few can resist a dog begging for table scraps, especially
if it is a puppy. But no matter how human your dog behaves,
whether it wakes you up with a wet kiss, expresses opinions
about your friends, or cons you into giving up your side
of the bed, it's digestive system and metabolism are uniquely
canine.

Some specific differences between dogs and humans include:

* While vitamin C is considered an essential vitamin
in humans because we can't make it and must have it, it's
not considered essential for dogs. They form vitamin C in
their liver.

* Humans need to monitor their cholesterol levels, which
generally rise in proportion to the amount of fat or meat in
the diet. However, although a dog's cholesterol levels can
become abnormally elevated, a meal high in saturated
fats is just what they need.


* Dogs must have meat in their diet to be in optimum health.
A dog's sharp canine teeth are evidence of their need to
tear apart raw meat, and thus their requirement for meat.
Humans, on the other hand can eat a vegetarian diet with
high grain, and maintain optimum health.

* Dogs can't handle large amounts of fiber, while humans
can. When dogs are fed large quantities of fiber, it can result
in constipation, excessive stool output, decreased nutrient
digestion, and poor visual appearance.


* Since a dog's sense of smell is so much more sensitive than
a person's a dog is less likely to eat spoiled or rancid food
than we are.

* A puppy has a greater need to drink the mother's first
milk (colostrum) than does a newborn child. Colostrum
delivers immunity to newborns, as does the placenta. A
child gets a great deal of immunity from the placenta, while
a puppy gets less; thus the more important colostrum is
to a puppy.

* A dog's milk contains different nutrients than a human's
milk; thus a puppy can't be fed a baby formula.


* A newborn puppy requires more iron and copper than a
human infant does.

* A human athlete will "carbohydrate load" before an
event, while a dog athlete (sled dog) will be given high
quantities of fat just before and during the event.

* A baby can begin solid food at four months, while a
puppy can begin as early as six weeks.

* The gestation period for humans is nine months, while
a dog's is two months. That means that a human's nutritional
pregnancy demands last way longer than a dog's.


* While chocolate can have negative effects on dogs
and humans, they are different. Excessive chocolate eating
can make a human fat and, because of the caffeine,
nervous. Chocolate, even in small amounts, can kill a dog.


Most nutritionists agree that a human diet should not contain
more than 15% protein. While the protein requirement in
dog food depends on the amount of fat, amino acids, and
other nutrients in the food, a minimum of 18% protein
is a safe requirement for an adult food. However, as
with humans, a dog's nutrition is based upon adequate intake
of three main ingredients: protein, carbohydrates, and fat.

If Your Pet can't find something to satisfy their hunger..... 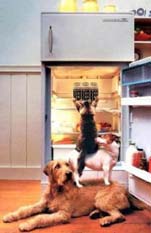