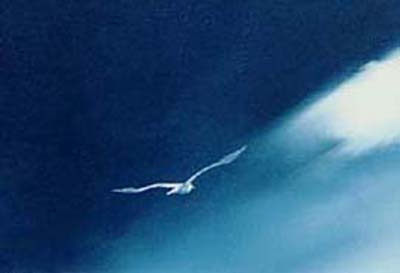 In Richard Bach's story of Jonathan Livingston Seagull, the
author presents his philosophy of life


Jonathan Livingston Seagull, the novel written by Richard Bach
in 1970 is about a young seagull's efforts to rise above the
ordinary.

Jonathan Livingston Seagull is a bird not satisfied with being
merely a seagull. The other seagulls treat him as an outcast for
going outside the norm. In a flock where individuality is frowned
upon, Jonathan finds himself a loner and an outcast.


On the surface it appears to be a simple animal fable about a
seagull learning how to become the greatest flyer of all time. However,
the book is really about self-perfection and self-sacrifice.


After performing feats of tremendous courage and skill, Jonathan
is expelled from the flock. This gives him the freedom to develop
his skills, and in so doing he reaches a higher plane of achievement,
a heaven of sorts.

The lessons that Jonathan learns in his travels reflect both a
greater peace of mind and a freedom to be himself. He found a way
to to achieve more. And then he went back to teach others.

The following is excerpted from:
ultramind.ws/jonathan_livingston_seagull.htm

Where do creative ideas come from? From your own brain? From
somebody else's brain? From higher intelligence? Yes...all these
sources...and more.

For best selling author Richard Bach, the idea came from a bird.

"It was the weirdest experience of my life," Bach said in an
interview quoted in the November 1972 issue of Harper's Bazaar.
"I was walking along one night, worrying about the rent money,
when I herd this voice say, 'Jonathan Livingston Seagull.' But no

one was there. I had absolutely no idea what it meant. When
I got home, I suddenly had a vision of a seagull flying along,
and I began to write. The story certainly didn't spring from any
conscious invention on my part. I just put down what I saw."

(1973)
Jonathan is sick and tired of the boring life in his sea-gull
clan. He rather experiments with new, always more daring flying techniques. Since he doesn't fit in, the elders expel him from the clan. So he sets
out to discover the world beyond the horizon in quest for wisdom.