Sinbad Jr. with the help of his trusty and often
smart alecky sidekick Salty, sailed the high seas
fighting the works of evil.


Sinbad Jr's magic belt granted him the powers of strength
equal to 50 men, plus the ability to fly. Salty his parrot
already had the ability to fly, but aided Sinbad Jr. mostly
with his support and ever funny remarks.

Sinbad Jr. premiered 1965 and was a Hanna-Barabera
creation. 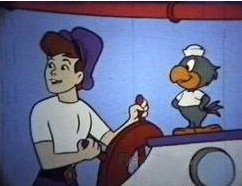