Because of the DNA study of cats carried out by Driscoll and
his companions they have been able to determine which cats
are wild and which are domestic. They herded thousands of
cats and sampled their blood in order to produce the study
that has been published in the Journal of Science.

Within the study wild cats from different and various parts
of the earth were studied. This included the European
Wildcat, Central Asian Wildcat, Near Eastern Wildcat,
Southern African Wildcat and the Chinese Desert Cat.

It was determined from the samples of genetic code that the
Near Eastern Wildcat and the domestic cats that we know
today fall into the same genetic clade. This means that they
have the same ancestors, meaning that the ancient ancestors
of the wildcats in the Near East were most likely the first
cats to be domesticated.

Because of the degree of diversity between the domestic cats
of today it has also been suggested that the cat has been
with humans for seventy thousand to one hundred thousand
years in order to create the range of different genetic
variances (breeds) of today. Because of this genetic
evidence the original thought that the domestic cat was an
ancestor of the wild cats of Africa has been disproved.

Many people like the theory that the housecat is actually a
part of a species that originated millions of years ago from
a type of saber tooth cat called Nimravids. In fact, the
origins are much more humble than that, and even though most
cats are genetic "cousins" to each other, this doesn't mean
that the variance that occurred had to come from one direct
species of cat. There are and have been any number of cats
in the world that the wild cats may have come from. In fact,
domestic cats have probably resulted from breeding and
interbreeding of cats from many places, much like the dog
companions of today.

Dogs have very plastic genes, so to create a new breed of
dog is relatively easy and can be managed within a human's
lifetime. But the cat's genes are not as plastic and trait
selection had to be maintained for a long time before the
trait carries true. Even now there are still throwbacks in
purebred cat breeds.


See The Evolution of the Cat Part 1

The Evolution of the Cat Part 2 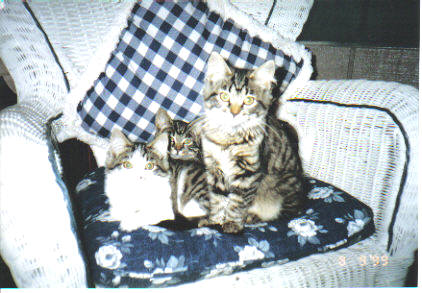 
We want your precious kitty to live the longest, healthiest
life possible. Please take a few minutes and check out our
recommended Cat Health Care products. Your kitty will certainly
reward you with lot's of love and purrs.