One day Chicken Little was walking in the woods when --
KERPLUNK -- an acorn fell on her head Oh my goodness!
said Chicken Little. "The sky is falling! I must go and tell the
king."

On her way to the king's palace, Chicken Little met Henny Penny.
Henny Penny said that she was going into the woods to hunt for
worms.

"Oh no, don't go!" said Chicken Little. "I was there and the sky
fell on my head! Come with me to tell the king."

So Henny Penny joined Chicken Little and they went along and
went along as fast as they could.

Soon they met ocky Locky, who said, "I'm going to the woods
to hunt for seeds."

So ocky Locky joined Henny Penny and Chicken Little, and
they went along and went along as fast as they could.

Soon they met Goosey Poosey, who was planning to go to the
woods to look for berries.


"Oh no, don't go!" said ocky Locky. "The sky is falling there!
Come with us to tell the king." So Goosey Poosey joined
ocky Locky, Henny Penny and Chicken Little, and they
went along as fast as they could.

Then who should appear on the path but sly old Foxy Woxy.

"Where are you going, my fine feathered friends?" asked Foxy
Woxy. He spoke in a polite manner, so as not to frighten them.

"The sky is falling!" cried Chicken Little. "We must tell the
king."


"I know a shortcut to the palace," said Foxy woxy sweetly.
"Come and follow me."


But wicked Foxy Woxy did not lead the others to the palace.
He led them right up to the entrance of his foxhole. Once they
were inside, Foxy Woxy was planning to gobble them up!


Just as Chicken Little and the others were about to go into the
fox's hole, they heard a strange sound and stopped.


It was the king's hunting dogs, growling and howling.
How Foxy Woxy ran, across the meadows and through the forests,
with the hounds close behind. He ran until he was far, far away
and never dared to come back again.

After that day, Chicken Little always carried an umbrella with
her when she walked in the woods. The umbrella was a present
from the king. And if -- KERPLUNK -- an acorn fell, Chicken
Little didn't mind a bit. In fact, she didn't notice it at all. 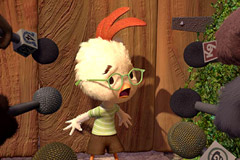 
In a universe completely populated with talking animals, Chicken
Little's wildly active imagination and tendency to overreact have
made her an outsider at home and in her community.

When she nearly destroys the town in the great "sky is falling
down" debacle, an angry mob forces Chicken Little to shape up. She
heads off to Camp Yes-U-Can where she meets other animals
with challenges of their own.

But when Chicken Little discovers that the camp counselors have
a dastardly plan, she will have to overcome her history of
paranoia and summon her newfound courage in order to thwart the evildoers?

Stuffed Chickens - Full of Pleasure and Fun
(See picture below)