All Crossbills have sharply curved mandibles, which cross when
their bills are closed.

Crossbills like conifers and feed on conifer seeds, which they obtain
by prying apart the scales of cones.


The bill size of each species and subspecies is adapted for a particular
size and shape of cone. Adult males of all species are red,
females are grayish green, and the young are heavily streaked.


Two species occur in North America. The red crossbill
is found in Europe and in north and central Asia as well as
in North America. Males have orange to dull red plumage,
with black wings.

The white winged crossbill occurs in northern Russia and in
North America; the male of this species is rosy red and both
genders are marked with white wing bars.

Females of both species are olive-gray and yellow; they lay three to
four pale green, brown-spotted eggs, in well-formed nests built
in trees.

Crossbills are not considered migratory, but they shift
their breeding grounds erratically, probably in response to the
availability of pine cones. Sometimes they suddenly appear in
large numbers in areas where they were formerly rarely seen.


Crossbills call frequently whilst moving about in the trees,
making a high-pitched, metallic sound like ‘glipp-glipp’. The song
is a series of trills and twitters.


There is an old belief that the crossbill acquired its peculiar
beak as a result of trying to remove the nails from the hands
and feet of Christ when he was on the cross. This incident also
accounted for the male bird’s red breast, a story which is also
associated with other red-breasted birds such as the robin
and goldfinch. 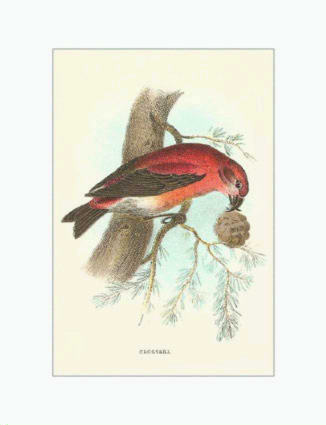 Crossbills belong to the family of finches and the order Passeriformes.


Types of Crossbills include:


Perching Birds - Discover More about them


You will Cherish these Adorable Stuffed Plush Birds