Introducing your present Cat to another Cat
By: Alfred


It is easier to introduce a new cat to a multiple cat home
instead of a single cat home. The cats in a multiple cat
home have already learned to share their space, whereas in a
singular cat home the one cat has likely never had his
territory challenged.

You are not a cat so your cats don't consider you to be a
challenger to their territory. In fact most cats consider
their people to be parents or kittens and therefore not a
threat to them in any area.

A male cat will probably accept a strange female cat more
than another male. Another male cat is a challenger to his
territory so if you are going to introduce another cat into
your home try and choose a cat of the opposite sex, and in
either event be sure that they are both neutered or spayed
unless you want fights and/or kittens.

Again you must understand about the basic behavior of cats
and watch for clues as to whether or not the cats will
accept each other. Separate the two cats for a while from
the beginning, and do not pay more or less attention to the
new arrival than to the resident cat.

Cats do have a pecking order when they live together, and
the more dominant cat will fight with the other to establish
dominance. Understand that this is a natural process and
some fighting is likely to happen unless they have grown up
with each other and the pecking order has already been
established. Testing of the pecking order still happens even
then, just not as often.

You hear more about dominance games between dogs than your
do with cats. Understand that it is the same with cats, just
a little more understated. The dominant cat has first rights
to food and water. They have first rights to your attention.


And if they see that the other is trying to usurp these
rights there will be a fight to make sure that the cat that
is not dominant knows where the lines are. Most of the time
the cats won't injure each other, in fact it often looks
somewhat like they are playing with each other. Your cats
will probably work things out on their own if you don't push
them together. It can take weeks to months for two adult
cats who are strangers to get chummy. 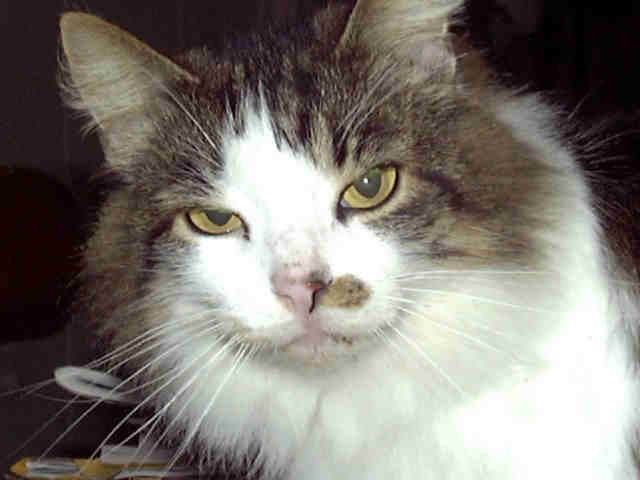