Juncos - Small and Lively around the forests and woodlands


Juncos often hop on the ground and pick up small seeds, but
seldom scratch with their feet.

The Dark-eyed Junco includes five forms that were once considered
separate species.

The slate-colored junco is the grayest, found from Alaska to
Texas and eastward.

The Oregon junco is boldly marked blackish and brown, with
a distinct dark hood, and is found in the western half of the continent.

The gray-headed junco has a brown back and gray sides and lives
in the central Rocky Mountains.

The white-winged junco is all gray with white wing bars, and breeds
only near the Black Hills of South Dakota.

The Guadalupe junco of Baja California is dull and brownish.

Two other forms may be distinguishable: the "pink-sided junco,"
a pale version of the Oregon junco, living in the northern Rocky
Mountains, and the "red-backed junco," a gray-headed junco with
a dark upper bill, found in mountains near the Mexican border 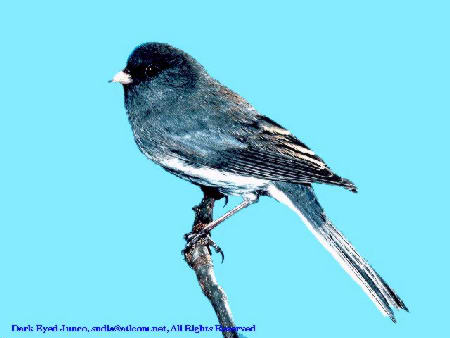 Juncos are members of the finch family and belong to the order
Passeriformes.

Index of all Perching Birds