Mother Goose: Tradition, who she was and some Rhymes
Presented by the birds @ Pet Care Tips

In the United Kingdom Mother Goose is better known for being
a popular Christmas pantomime. The rhymes from Mother Goose
have formed the basis for many classic British pantomimes.

Mother Goose is the name given to the writer (or collector?)
of many classic nursery rhymes and stories. She was
supposedly a country woman yet there is no specific woman or
writer who has been given the title Mother Goose. The first
mention of a Mother Goose appeared in the "Jean Loret's La
Muse Historique" that was collected in 1650. The term Mother
Goose was already familiar by then.

The gravestone of Mary Goose in the Granary Burying Ground
in Boston, Massachusetts has been shown to tourists and is
touted as being the resting place of Mother Goose. The
problem is that this can't be verified.

What is told to most people in Massachusetts is that Mother
Goose was the wife of Isaac Goose and was named either
Elizabeth Foster Goose or Mary Goose. Both of these women
(or one woman) died after the reference in the "Jean Loret's
La Muse Historique" had already been written.

According to Boston Travel writer Eleanor Early, the writer
of the Mother Goose nursery rhymes and stories was a woman
who lived in Boston in the 1660's and was the second wife of
Isaac Goose. Their combined children numbered sixteen.

When Isaac passed on, Elizabeth reportedly married Thomas
Fleet, a publisher. According to the history writer Early,
Elizabeth would sing to her grandchildren all day. Other
children would come by to hear these ditties. Then finally
her son-in-law wrote down all of her songs and printed them
all together to make the Mother Goose books.

According to Katherine Elwes in the book "The Real
Personages of Mother Goose" published 1930; Mother Goose was
really the wife of King Robert the Second of France, Berthe
la Fileuse (Bertha the Spinner, also known as Berthe Pied
d'Oie (Goose-foot Bertha).

According to Elwes, who cites the "Midi the Reine Pedauque",
Bertha la Fileuse, according to the legends in the book,
would spin wonderful tales that captured children's
attention. But the Mother Goose authority Iona Opie who
studies Mother Goose tradition doesn't give any credence to
the claims from Boston or from Katherine Elwes.

An English translation appeared in 1729 "Robert Samber's
Histories or Tales of Past Times", Told by Mother Goose".
This introduced "Cinderella", "Little Red Riding-Hood",
"Puss in Boots", "Sleeping Beauty" and other Perrault tales
to English-speaking audiences.

More tales where published by John Newbery, who published
"Mother Goose Melody," also known as "Sonnets for the
Cradle," a compilation of English rhymes. This switched the
focus of popular children's literature from fairy tales to
nursery rhymes and until recently this was the main
connotation associated with Mother Goose.

In the United States, the first publication of Mother Goose
stories showed up in Worcester Massachusetts, where in 1786
the printer Isaiah Thomas reprinted the Samber's volume
using the same title.

Ma Mere L'Oye which is a suite for the piano was written by
Maurice Ravel and a ballet around the suite was orchestrated
by him.

Some of the More Popular Mother Goose Rhymes


As I was going to St. Ives
As round as an apple

Farmer went riding/Upon his gray mare
Girls and boys, come out to play

God bless the master of this house

I had a little nut-tree
I had a little pony
I have a little sister
I saw a ship a-sailing,
If all the seas were one sea
In marble walls as white as milk
Intery, mintery, cutery-corn

Jack and Jill
Jack be nimble, Jack be quick

Pat-a-cake, pat-a-cake
Pease-porridge hot
Peter Piper
Kitty-cat, kitty-cat, where have you been?

Ride a horse to Banbury Cross
Robert Rowley rolled a round roll 'round
Rock-a-bye, baby

Simple Simon met a pieman
Sing a song of sixpence
Rose is red, The violet's blue

Old Mother Goose,
When she wanted to wander,
Would ride through the air,
On a very fine gander.


Mother Goose had a house,
It stood in the wood,
Where an owl at the door,
As sentinel stood.


She had a son, Jack,
A plain looking lad,
'Twas not very good,
Nor yet very bad.


She sent him to market.
A live goose he bought,
"See, Mother?" he said,
"I have not been for naught."

Jack's goose and her Gander,
Soon grew very fond.
They'd both eat together,
Or swim in the pond.


Then, one fine morning,
As I have been told,
Jack's goose had laid him
An egg of pure gold.


He ran to his mother,
The news for to tell.
She called him a good boy,
And said it was well.

Jack sold his egg,
To a merchant untrue,
Who cheated him out,
Of half of his due.

Then Jack went courting,
A lady so gay,
As fair as the lily,
As sweet as the May.

The merchant and squire,
Soon came at his back,
And began to belabour,
The sides of poor Jack.


Then old Mother Goose,
That instant came in,
And turned her son Jack,
Into famed Harlequin.

She then with her wand,
Touched the lady so fine,
And turned her at once,
Into sweet Columbine.

The gold egg in the sea,
Was thrown away then,
When an odd fish brought her,
The egg back again.

The merchant then vowed,
The goose he would kill,
Resolving at once,
His pockets to fill.

Jack's mother came in,
And caught the goose soon,
And mounting its back,
Flew up to the moon. 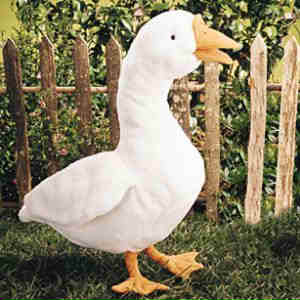