Tanagers are brilliantly colored birds with beaks that are
thick and conical. Most species feed on fruit. But, a group
of species has evolved adaptations of bill and tongue for
feeding on nectar.

The scarlet tanager is the eastern most species.

The adult male is bright scarlet with black wings and tail in
the breeding season, exchanging its red plumage for olive-green
feathers like those of the female before migrating to the Tropics.

The male western tanager, is bright yellow, with black wings and tail,
and red on the face only. The female differs from other dull-colored
species of the genus in having whitish wing bars.

Large groups of mixed species of tanagers, orioles, and other fruit-eating
birds gather on single trees in the Tropics, moving to another tree
when the fruit crop is exhausted.


Tanagers are basically tropical birds; only four species breed in North America, and all four move south for the winter. 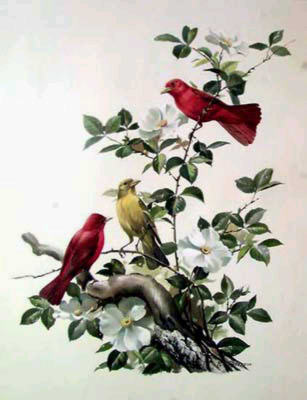 Tanagers belong to the order Passeriformes.

Types of Tanagers include: