Warblers are bright colored, females a bit duller than male.
Bills are slender, straight and pointed.

Males do all the singing.


Warblers range in length from 4 to 7 in.

The largest species is the yellow-breasted chat.

Warblers feed mostly on insects and only a small amount of plants.


The greatest diversity of wood warblers is found in North America and
the West Indies.


In most of the tropical species both the males and females
are brightly colored, but in the migratory North American
wood warblers, the adult males wear a female like plumage
after the breeding season.

Most of the wood warblers forage in trees and shrubs, but a few are
quite terrestrial. Among these are the ovenbird, the northern water thrush,
and the Louisiana water thrush. All have brown backs and white or
yellowish under parts streaked with black; the genders are alike.

The water thrushes live near water, and bob their tails up and down.

The largest of the northern genera has 21 species in North America and
six more in the West Indies. The yellow warbler, whose name is
aptly descriptive, has the greatest range, covering most of the
North American continent,

The Warbler is a small perching bird that is active and
insectivorous. They are a dull greenish or brownish in color
and are hard to identify among other similar looking
species. In fact, they have a nickname among birders in the
Old World as "LBJs," meaning "Little Brown Jobs".

The Warbler is from the family Sylviidae or family
Parulidae. They are found in gardens, marshes and woodlands.
They are song birds with no real distinguishing
characteristics. The Yellow Warbler is an exception.

A lot of warblers have some yellow plumage but the Yellow
Warbler is the most yellow of any other warbler species.
This species of Warblers prefers to nest in mangroves and
willows and is the only species with yellow tail spots.

The Yellow Warbler has a small thin pointed bill and has
yellow plumage over most of its body. The male Warbler has
some brown streaks on his chest. The face, throat and upper
parts of the bird are all a bright yellow. The under parts
can be olive to yellow-green in coloring. The wings are
edged with yellow and they have yellow tail spots. The males
can have a brown cap or brown all over the head.

The female looks like the male, just in reverse. The under
parts of the female bird are a bright yellow and the upper
parts are a greenish yellow, along with the face and throat.
They have an indistinct yellow eye ring. They also have
streaks of brown plumage that are narrow and indistinct on
the breast, sides and flanks. Females also have yellow tail
spots like the male, only smaller.

During migration the Yellow Warbler that breeds in Northern
America can be found also in Central America, the Caribbean
and Mexico.

Often when a Yellow Warbler makes a nest the Brown-headed
Cowbird will infect the nest, leaving its own egg. Instead
of moving to another location and building another nest the
Warbler will build a new nest right on top of the old one.
Sometimes a nest can get up to six tiers high because of
this. 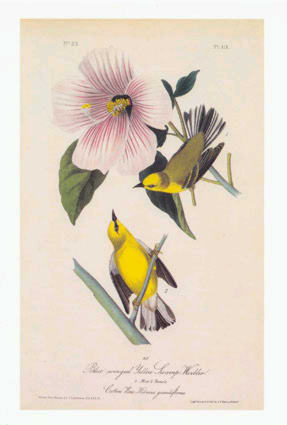 Warblers belong to the order Passeriformes.