The first of nearly 50 Peanuts television movies, A Charlie Brown
Christmas is the longest-running cartoon special in history,
airing every year since its debut in 1965. Whimsical,
melancholy, and ultimately full of wonder, it is a holiday
favorite for countless families.

On Thursday night, December 9, 1965, A Charlie Brown Christmas
was seen in more than 15 million homes, capturing nearly half
of the possible audience. That week it was number two in the
ratings, after Bonanza. It won critical acclaim as well as an
Emmy Award for Outstanding Children's Program and a
Peabody Award for excellence in programming.

As the Peanuts gang is getting ready to celebrate the Christmas
season, Charlie Brown finds himself becoming more and more
depressed as he searches for the true meaning of the holiday
amidst the glitz and commercialism.

Charlie Brown visits Lucy’s psychiatry stand for a nickel’s worth
of advice, where she determines that Charlie Brown needs some
seasonal involvement to overcome his holiday blahs. Lucy suggests
to Charlie Brown that he become director of the kid's Christmas
pageant.


Charlie agrees to direct the school Christmas pageant, but of
course, no one is willing to take direction form someone as
wishy-washy as Charlie Brown.

Lucy tells Charlie Brown what they need is a Christmas Tree
and to go find an aluminum tree for them.

Taking Linus with him, Charlie Brown picks out the smallest,
sickliest looking tree he can find, which is rapidly loosing the
few needles it does have. But, Charlie Brown can see how much the
tree needs him....needs somebody.

Returning back to the Christmas Pageant rehearsal, he finds the
gang dancing to un-Christmas like music, (played by Schroeder
on his toy piano) instead of rehearsing their lines.

The gang stops to take a look at the tree he brought, and
immediately bursts out in mocking laughter. Apparently Charlie
Brown has failed again. In disgust and humiliation he flees,
taking the tree with him.


And when he comes upon Snoopy's dog house, all decked out in
Christmas lights.....not to celebrate the joyous holiday, but to win
money in a contest.....Charlie Brown has had enough, and
almost loses all faith in Christmas.

Linus comes to Charlie Brown's rescue and wrapping his security
blanket around the tree, is somehow able to bring the tree back
to life, and make it look much healthier and stronger.

But it is when he explains the meaning of Christmas that the
"gang" gets the point of Christmas, and what Charlie Brown
was trying to do.


Linus:
"And there were in the same country shepherds, abiding in the
field, keeping watch over their flock by night. And, lo, the
angel of the Lord came upon them, and the glory of the Lord shone
round about them! And they were sore afraid ... And the angel
said unto them, "Fear not! For, behold, I bring you tidings o
great joy, which shall be to all my people. For unto you is born
this day in the city of David a Saviour, which is Christ, the
Lord."

"And this shall be a sign unto you: Ye shall find the babe
wrapped in swaddling clothes, lying in a manger." And suddenly,
there was with the angel a multitude of the Heavenly Host
praising God, and saying, "Glory to God in the Highest, and on
Earth peace, and good will toward men."

"That's what Christmas is all about, Charlie Brown." 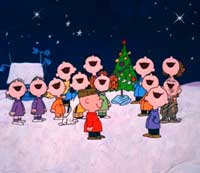 
Back To Charlie Brown, Snoopy, and Peanuts Index