Squirrels appearing in Christmas Movies and Books
By: Tippy and Alfred


Squirrels have become a popular icon at Christmas. This
could be because they are often seen among the winter
frosted branches frolicking and going about squirrel
business.


Squirrels belong to the family Sciuridae. They can be found
in Europe, North America and Asia. They are duirnal (active
during the day) unless it's a flying squirrel that tends to
be nocturnal (active during the night). They are also
omnivores, and their mating season starts in the late winter
around Christmas in the Northern Hemisphere. So here they
are more active and visible during the Christmas holiday
season.


Because they are often seen during this time of year they
are often depicted in winter paintings, and they have become
popular because they are cute and look great in a Santa hat.
You can see Squirrels as ornaments, statues and window art
sporting Christmas outfits of bows, Santa hats or elf hats.
You can also find them on clothing like t-shirts and
sweatshirts with cute Christmas sayings or winter
backgrounds.


Squirrels are also backup characters in several popular
Christmas movies such as "Christmas Vacation" made in 1989
with Chevy Chase. Also in the popular TV movie "Spongebob
Squarepants Christmas," Sandy the Squirrel is a back up
character to the underwater gang. There is also a popular
winter movie called "Ice Age" that includes the comic
squirrel Scrat.


There are also several popular books about squirrels or that
have squirrels in them such as the Beatrix Potter stories,
the Redwall series of books, in Prince Caspian's story by
C.S. Lewis, the Starwife and her subjects from Robin
Jarvis's Deptford novels, Sandy from Spongebob Squarepants,
Hammy from "Over the Hedge", Benny in "The Wild", Rodney
from "Squirrel boy", Secret Squirrel, Slappy Squirrel from
"Animaniacs", the squirrel-themed super-heroine Squirrel
Girl, Foamy the Squirrel of Neurotically Yours and Rocky and
Bullwinkle's partner in adventures.


Because of these popular books, movies and television series
you can often buy toys of these squirrel characters and give
them as gifts during Christmas.


Squirrels have made their way into popular culture and even
the Christmas holiday. You could decorate your entire house
in a squirrel Christmas theme if you wished. You can even
sport clothing with these cute rodents in Santa hats. So
when you think of Christmas think of the squirrel and its
contributions to the holiday season. 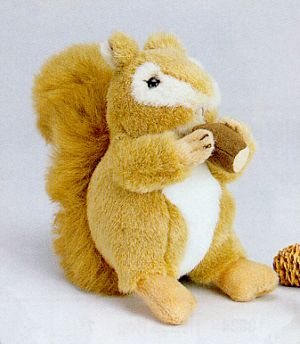 All About Santa and Christmas