Dogs & Cats can get along well with each other. 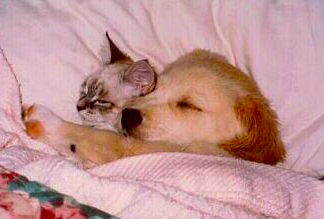 
Helping Dogs and Cats Get Along
By: Tracy Vogel, Staff Writer

The introduction didn’t go too well.

When Sam Kabbel brought her newly adopted cat into the house, one of her male dogs started growling. The two females began snapping at the cat as though they thought she was their newest squeaky toy. The other male stared and pulled at his leash, choking himself with the effort.

Bringing a dog and cat together is often a hit or miss situation.

Some animals will get along from the beginning. Others take time.

And some others simply can’t exist in the same household.

Four retired racing greyhounds, bred to chase, and one slightly freaked out cat. It was, to put it mildly, a volatile mix.

But Ms. Kabbel, a pet behavior counselor, had expected that, and was ready for the work involved.

"It took a lot of patience, going at the animal’s pace and not my expectations and desires," she said. In 60 days, the animals had all achieved a peaceful coexistence—but that was with careful, painstaking work every single day.

Bringing a dog and cat together is often a hit or miss situation.

Some animals will get along from the beginning. Others take time. And some others simply can’t exist in the same household.

In the last case, trainers won’t even try to make it work. It’s just too dangerous. "It’s horrible to be with someone on the phone who thought the dog was OK, and the cat ended up getting killed," said Maureen Strenfel, animal behavior counselor for the Humane Society of Santa Clara Valley, Santa Clara, Calif.

Behavior counselors distinguish between playful or excited behavior and real predatory reactions. "If we see true predatory behavior on the part of the dog, it’s not going to work," said Kelly Moffat, DVM, a veterinarian and behavior counselor with Mesa Veterinary Hospital, Mesa, Ariz. "It’s not something you can modify out of their genetics. It’s normal behavior, but when there’s access to small animals like guinea pigs and cats, it’s very dangerous."

If the dog won’t take its eyes off the cat, that’s a danger sign, said Ms. Strenfel. Barking and growling can be part of the picture, but aren’t necessary. In fact, the silent dog can be more worrisome, since from an evolutionary perspective a stalking animal doesn’t necessarily make lots of noise to warn its prey.

You can judge the level of danger by how easily the dog can be diverted from the cat, said Ms. Kabbel, who owns Pet Behavior Solutions, Phoenix, Ariz. If you stamp your feet, for instance, and your dog doesn’t even realize you’re there, you have a problem that you may not be able to fix. "If the intensity is such that it’s very difficult to distract the dog, that’s a gigantic risk."

Even small dogs can be dangerous, although obviously it’s easier for the owners to control a smaller dog. And sometimes the cat is the problem, and just as with a predatory dog, there’s no way around it. It’s not possible to keep both animals. "If the cat is hurting or dangerous toward the dog, it’s not fair to the dog, because the cat has teeth and claws and can launch itself through the air," Ms. Kabbel said. "If so, it’s not appropriate to work with that."

And cats are a little harder to handle, because attempts to divert their attention tend only to make them more aroused.

Next, avoid the most common mistake people make: punishing the animal for going after your other pet.

That approach has several problems. Mainly, your pet will associate the other animal with punishment, when you want it to associate the cat with pleasantness. "The dog thinks: ‘Bad things happen when the cat’s around,’ " Ms. Kabbel said. "The cat becomes the predictor of the dog’s punishment. It becomes even more determined to get rid of the cat, because this never happened when the cat wasn’t around."

Further, punishing the dog for barking or snapping doesn’t deal with the animal’s hostility toward the cat—it just teaches it not to give off warning signals. The next time it goes for the cat, it won’t bark first, Ms. Strenfel said.

Instead, you need to manage the environment. The dog should be on a leash, the cat in a crate, both in different rooms separated by a door under which they can sniff one another—they shouldn’t have the chance to get at one another. If one lunges, stop it and take it elsewhere, but don’t shout or strike.

Ms. Kabbel made sure her cat never had the chance to run from the dogs. Chasing cats is rewarding for dogs; it’s just fun in and of itself. She never gave the dogs a chance to learn that when she was acquainting the bunch. The cat was always in a crate, or the dogs on a leash, or the whole group in a tiny room with no place to race around.

Further, she never picked up the cat around the dogs. Typical dog behavior is to leap up and jump at what you’re holding.

Instead, she set about slowly teaching the dogs to become accustomed to the cat’s movement, smell and sounds. Her method can be summed up in three words: distract, redirect, and reward.

She’d put her cat in a large crate and hang strings from its ceiling so it would bat at them. The dogs would sit around the crate, watching the cat and learning how it moved and smelled. She’d put a dog on a leash and let the cat run free in the room. She’d give the dogs a bone and wave a fishing pole toy for the cat. "I’d get them used to the fact that cats fly through the air like mosquitoes, and they don’t need to pay attention to that."

your pet realize it’s a wonderful thing that the other animal is near. 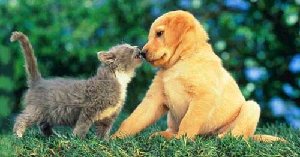 Each dog learned the lesson individually, then learned the same lesson with a second dog in the room, and so on. Since each dog influences the others’ behavior, the lessons had to be relearned over and over until they could behave as a group.

If you constantly distract the dogs’ attention from the cat, and reward them for being distracted, eventually they fall into the cycle automatically, she said.

And rewards are essential. Shower your pet with treats when the other animal is around—they’ll make your pet realize it’s a wonderful thing that the other animal is near. If you’re keeping your animals in separate rooms at first, you should feed them together, each with a bowl on the opposite side of the door. When you place your new cat where your dog can see it—in a crate, or in another room behind a baby gate—the dog should get plenty of treats.

One great way to reward your dog for good behavior is by giving them tasty, yummy treats!

For great tasting and healthy treats for your dog or cat, check out Healthy Pet Net's quality line of holistic products here:

If you’re introducing a new dog to a cat, the system is the same, except, of course, that you treat the cat. If the cat goes after the dog, it’ll be harder to stop. You may want to keep a squirt gun on hand to interrupt the behavior.

Ms. Strenfel recommends keeping the new animal in a small area for the first 30 days as you gradually acclimate both animals to one another.

Eventually, as they grow used to one another, you should do simultaneous meals, with the cat on a counter and a dog on the floor. "Both are aware of each other, but there’s something very important going on," Ms. Strenfel said.

Today, about two years after they were introduced, Ms. Kabbel’s cats and dogs get along amiably, despite the fact that the cat, Tsunami, is what she calls an "adrenaline junkie." Tsunami will walk up to one of the sleeping greyhounds and slowly bite its foot, or box its nose, then take off running.

The aggravated dog will often growl and give chase, annoyed at being roused. The cat enjoys this immensely. If, on occasion, it realizes it won’t get away in time, it flops down on the floor. At which point the dog screeches to a halt and, in the grand tradition of canines everywhere, wonders what it was doing. "My dogs are wonderful with the cat," she said.

So a year ago, she got a bunny. "I have a food chain in my house," she joked.

Ms. Kabbel went through the process again with the rabbit, successfully. The cat, being a cat, has to be monitored whenever it’s around the rabbit, and likes to use its head as a punching bag.

But other than that, peace reigns. Turns out cats and dogs living together isn’t as apocalyptic as it sounds.

We Deserve Rewards!
By: Tippy & Alfred

We're two guys that get along really well together. In fact Alfred kisses Tippy at least once every day.

Tippy doesn't seem to mind...or at least she "puts up with it."

But...since we're such good pets, we require and deserve to have some very good treats coming our way!

One great way to reward your pets for good behavior is by giving them these tasty, yummy treats that we get.

Treats for Dogs and Cats: