The Model John Deere Model G a full 3 plow tractor rounded out
the John Deere general purpose tractor line. The Model G tractor
originally tested at 20.7 drawbar horsepower and 31.4 at the belt.
It was introduced as an unstyled tractor in 1937.

In 1942 the G was replaced with a styled model GM. The G was
the last of the lettered series to get the styling. The GM had 6
forward speeds, rubber tires, electric starting and lights from
the factory.

However, thousands of the GM's were built with 4 speed transmissions,
steel wheels and hand start because of the interference of World War
II. The GM also had the exhaust stack and air intake stack placed
side by side, rather than the original design...fore and aft.

The GM designation came to "fool" the government into thinking this
was a new tractor model in order to get a price increase from the
War Price Board. The cost increase was needed to cover the cost
of the new 6 speed transmission.

The M designation stood for modernized.

Early in 1948 the G designation came back and the GM dropped. The
new G got a cushioned seat mounted over the battery box plus
electric start and lights.

G Tractors can be divided into 3 main groups 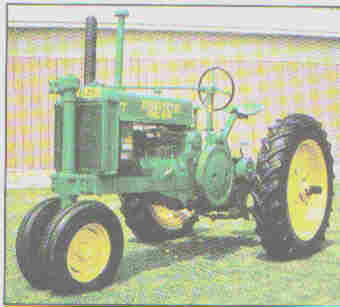 Model G production began in the middle of the John Deere Centennial
Year, 1937.

Model G's from serial number 1000 (the first) to 4250 had a smaller
radiator. This prompted over heating which called for a change to a
bigger radiator. Many were changed by dealers or farmers, but no
one knows how many original smaller radiator G's are still around.
Sometimes these are referred to as low radiator G's.

At serial number 7100 in late 1938 a larger upper water pipe was
put on the tractor to help the cooling system do a better job.

Some tractor pulling enthusiasts like the big engine of the G and
using an after market power block and other modifications some G's
have been reported as making up to 100 horsepower.

Back to John Deere B


Return to: History of Deere Tractors