The only birds still called Titmice are the crested North American
species, such as the Tufted Titmouse. It is a gray bird with rusty
flanks and measures about 6 in long.


Titmice are gregarious most of the year and forage in flocks
with other species. When the breeding season begins, pairs leave
the flock and set up territories.


Titmice nest in holes in trees or in nest boxes and lay 5 to 8 eggs.

Only the Bridled Titmouse has a bib.

Titmice often flock with chickadees, warblers and kinglets,
except in the nesting season. 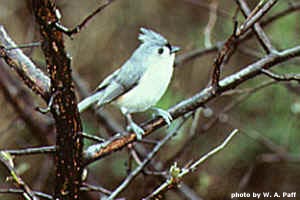