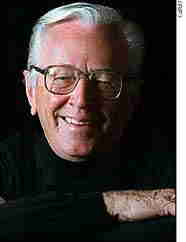 The Creator of Charlie Brown and Peanuts

Approaching his 75th birthday celebration Wednesday, Charles
Monroe Schulz could wax nostalgic about growing up as a barber's
kid in the Twin Cities.

But forget about the back-yard ice rinks and the rumbling
streetcars. Schulz would rather be frank.

"Those were some terrible times," he said the other day, after
his admittedly shaky hand sketched out yet another Sunday
"Peanuts" comic strip. More than 200 million readers will see his
work today in 2,400 newspapers in 68 countries.

But the $20 million a year that Schulz grosses today can't erase
the memory of too many pancake-dinner yesterdays. He always
thought his parents really liked pancakes; now he realizes it was
all they could afford.

From the studio in his sumptuous Santa Rosa home about an hour
north of San Francisco, Schulz recently recalled the Depression,
the rejections and "those early defeats you never get over."

Schulz was a 6-foot-tall, 136-pound outcast at St. Paul Central
High School, and his cartoons were deemed unworthy for the senior
yearbook in 1940.

"I don't know which was worse - the Army or Central High School,"
Schulz said. "I was a bland, stupid-looking kid who started off
bad and failed everything and hated the whole time.

"Then my art teacher asked me to draw some school scenes for the
annual. I was delighted and waited anxiously the last couple days
of school until the yearbook came out - with none of my cartoons."

His mother, Dena, died of cancer just as her only child turned
20. And Schulz's father, Carl, nearly lost his 35-cents-a-cut,
three-chair Family Barbershop during the Depression.

"At one point, he was seven months behind on the rent," Schulz
said. "I asked him once how in the world he could keep that up,
and he said the man who owns the building can't find anyone with
money to rent the place, so he's glad for what he gets."

Then there was Schulz's love life. As a fledgling cartoonist at
what is now Art Instruction Schools in Minneapolis, Schulz fell
in love with a red-haired co-worker named Donna Johnson and
promptly proposed.

She said: "No" and married a Minneapolis firefighter named Al
Wold instead. Today, Al and Donna are celebrating his retirement
on a vacation in England. Their 50-year anniversary is coming up
in 2000.

"I loved that little girl but her mother convinced her I would
never amount to anything," said Schulz, who immortalized Donna as
the red-haired girl who frustrates his alter ego, Charlie Brown,
as much as any kite-eating tree or quick-yanking football holder
ever could.

"You never do get over your first love," Schulz said. "More than
having your cartoons rejected or three-putting the 18th green,
the whole of you is rejected when a woman says: `You're not worth
it.' "

Schulz plans to celebrate his 75th birthday much like the
previous few: golf and dinner with his friends and some cake with
his second wife, Jeannie, and his five grown children.

Schulz does have a secret birthday wish, though.

"My goal in life," he said, "is to meet Andrew Wyeth" - the
80-year-old Pennsylvania painter who won the 1990 Congressional
Gold Medal, one of America's most highly regarded living artists.

"I'll never be an Andrew Wyeth, and that's kind of sad," Schulz
said. "I wish what I did was fine art, but I doubt it is. It's
well researched and authentically drawn, but I do not regard what
I am doing as great art.

"Comic strips are too transient. Art is something so good it
speaks to succeeding generations. . . . I doubt my strip will
hold up for several generations to come."

Not that he's about to stop producing. After 47 years, Schulz
still draws his own strip every day without the drafters and
creative teams employed by some of his younger colleagues.

"Some days, I just look at my yellow attorney's pad all day and
think of nothing, but today I finished two Sunday strips," he said.

His hands are getting shaky, but when the computer reduces his
drawings, the quivering lines are hard to detect.

"I kind of prop one hand against the other," he said. "And it all
comes a little slower."

He's 10 years past a typical retirement age, but has no plans to
pull the plug on his moon-faced characters with their childish
bodies and grownup anxeties.

"I'll keep drawing as long as I stay well - there's nothing else
I know how to do," he said. "I enjoy - if you can use that word -
drawing just like a pianist plays piano, a poet writes poems and
a painter does watercolors. They do it because life wouldn't mean
anything if they didn't. It's my life."

Of all the Twin Cities' native artistic sons - from F . Scott
Fitzgerald to LeRoy Neiman, from Prince to Garrison Keillor -
Schulz might have put the biggest imprint of all in the
collective psyche of American pop culture.

Through Linus, he gets credit for popularizing the term,
"security blanket." His "Happiness is a warm puppy" line became
'60s bumper-sticker fodder. He's inspired umpteen TV specials and
a Broadway play, not to mention an amusement park at the Mall of
America.

"But, incredibly, the state and the Twin Cities largely ignore
him," said Dave Mruz, a Minneapolis art historian and cartoon
buff. "It's unbelievable that his hometown has no permanent
statues, no displays at the History Center, nothing to recognize
him."

"Nobody would have believed that when I went to school," he said.
"At our 25th reunion, I was on the list of people nobody knew
what happened to."

The last time he visited Minnesota, in 1994, Schulz went up to
the apartment above O'Gara's Bar and Grill at Snelling and Selby
Avs. where he lived as a child, and he sketched a Snoopy on the
wall. Next to the oversized snout of a beagle known worldwide,
Schulz drew a shaky little heart.

"I suppose we all go through phases in our lives," Schulz said.
"I don't know that they were the best years. There were some good
ones and some nasty ones. The streetcar track no longer runs out
front and it's kind of sad the barbershop's not there. But that's
home, nevertheless." 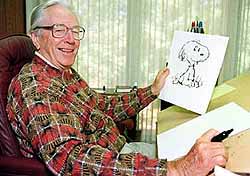 1928/ Schulz's childhood home is at 1604 Dayton Av. in St. Paul.
As a kindergartner at Mattocks School, Schulz draws a man
shoveling snow with palm trees in the background and his teacher
says: "Charles, someday you'll be an artist." (Relatives had
recently moved to California and sent word of palm trees.) Schulz
later attends Richard Gordon Elementary School.

1934/ The Schulzes are given a black and white mutt. "Spike was
totally uncontrollable. He loved to ride in my father's car,
though, so when he'd get loose, the only way you could get him to
come would be to honk the horn. Spike and Snoopy have similar
markings." 1936/ Schulz enters St. Paul Central High School,
where he says he routinely flunked classes. "I even flunked
dating, which was understandable, because who'd have gone out
with me?"

By this time, his family moves to 473 Macalester St. in St. Paul.
He works as a caddie at Highland Park Golf Club.

1941/ Schulz takes cartooning-by-mail courses from the Federal
Schools, a Minneapolis correspondence program. His instructor,
Frank Wing, gives him a C-plus in Division 5: "Drawing of
Children."

1943/ Drafted into the Army, he serves as a infantryman, staff
sergeant and machine gunner, although he never gets too close to
the European front lines.

1945/ Schulz earns $85 a week as an instructor at the Federal
Schools, now known as Art Instructions School. In the evenings,
in the apartment he shared with his father over what is now
O'Gara's bar in St. Paul, he letters other cartoonists' comics
for Timeless Topix, owned by the Roman Catholic Church.

1947/ He sells a cartoon feature called Li'l Folks to the St.
Paul Pioneer Press. It runs weekly for two years.

1948/ Schulz sells a panel to Saturday Evening Post for $40 of a
young boy reading a book in a big easy chair. "I wanted to be
somebody. All of us want to be somebody. I remember so well that
first night I was able to say: `I am a cartoonist.'"


June 1950/ He boards a train from St. Paul to New York with a
portfolio of cartoons. Signs a five-year deal with United Feature
Syndicate, which calls for a 50-50 split of profits. When the
syndicate names his strip "Peanuts," Schulz hates it because, "to
me, `peanuts' means insignificant and unimportant."

1952/ Strip spreads to 40 U.S. papers and one in Japan. Schulz
teaches correspondence cartoon drawing classes and has a studio
at the Bureau of Engraving, 500 S. 4th St.

1958/ With "Peanuts" now in 355 U.S. papers and 40 foreign
dailies, Schulz moves from his home at 112 W. Minnehaha Pkwy. to
Santa Rosa, Calif. He builds a 12-room house and studio on four
acres with the address One Snoopy Place.

Sniffy and the Red Baron?

Originally, Schulz was going to name the adorable beagle in his
strip "Sniffy," which he modeled after his childhood mutt Spike.
"I was walking around the Powers department store in Minneapolis
and there was a little magazine stand. I saw a comic with a dog
named Sniffy and thought, `Oh, no, there goes my dog's name.'
Then I remembered a long time ago when my mother said: `If we
ever have another dog, we should name it Snoopy.' "

In his early cartoonist days at the Art Instruction Schools in
Minneapolis, Schulz worked with people named Frieda Rich and
Charlie Brown, who went on to become a probation officer for the
Hennepin County Juvenile Detention Center. Schulz says he has
transferred many of his own early frustrations into his main
character, Charlie Brown. "Oh, definitely, the poor guy," Schulz
said. "I worry about almost all there is to worry about. And
because I worry, Charlie Brown has to worry." Both Frieda and
Charlie have died, but another old Minneapolis pal, Linus Maurer,
lives in southern California and talks with Schulz occasionally
by phone.

As a childhood St. Paul Saints hockey fan and an ice skating
aficionado, Schulz still skates frequently in Santa Rosa, where
the city's ice arena fell on hard times in 1968. "The arena
wasn't in great shape, and when I heard it was going to close, I
said, `I wish there was something we could do about it,' " Schulz
said. So, in 1969, Schulz built the Redwood Empire Arena, an
architectural gem a block from his studio. That's one of the
reasons he was inducted into the U.S. Hockey Hall of Fame.