Groundhog Day - the Second Day in February
By: Tippy & Alfred


Groundhog Day is celebrated in the United States and Canada
on the second day of February of every year. The oldest
reference to celebrating Groundhog Day is in a diary entry
by a storekeeper named James Morris, in 1841. This holiday
is based around the appearance of the Groundhog and whether
or not it sees its shadow. Whether it sees its shadow or not
supposedly determines whether winter will last another six
weeks or spring will arrive quickly.


The Groundhog, also called the woodchuck, "land beaver," or
"whistle pig" and related to the marmot or ground squirrel,
is part of the family Sciuridae and is a rodent. They are
found in most parts of North America, though not in the
mountains or deserts. Groundhogs are considered to be pests
by most farmers because of their habit of eating the
vegetable that farmers grow. They make mounds of dirt at the
exit of their burrows and this signifies that a Groundhog is
in the area. On the other side of the coin, many country
families use a nice fat groundhog to make excellent stew.


The superstition states that on February second, after
winter hibernation, if a Groundhog comes out of its burrow
and sees its shadow you can expect six more weeks of winter.
If the day is overcast and the groundhog does not see its
shadow then there will be less than forty-two more days of
winter weather, and you can safely begin thinking about
planting crops.


In the United States the tradition of Groundhog Day is
derived from this old Scottish poem:

As the light grows longer

If Candlemas be fair and bright

Winter will have another flight.

If Candlemas be cloud and snow

Winter will be gone and not come again.

A farmer should on Candlemas day

Have half his corn and half his hay.

On Candlemas day if thorns hang a drop

You can be sure of a good pea crop.


Of course this is just a superstition and more often then
not groundhogs contradict each other. Famous groundhogs like
Punxsutawney Phil and Jimmy the Groundhog contradicted each
other in 2007. So although it is fun to celebrate, basing
your spring plantings on the prediction of a groundhog may
not be the smartest thing to do.

All About The Holidays 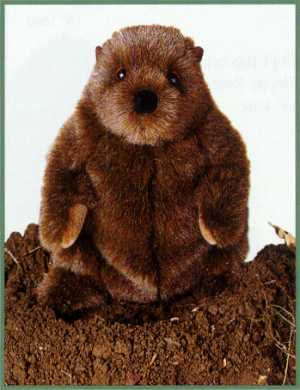