The Robin is one of America's best known birds, often seen
on lawns searching for insects or worms. It is an old adage
that when you see the first Robin, spring is right around the
corner.


The American Robin is about 10 in long, the largest of the thrushes.

The male is olive-gray; the top and sides of the head are black, the
chin and throat are white with black streaks. The female is
similar but with a paler, duller breast.


The adult robin is orange breasted, spotted in immature birds.

Robins live close to human dwellings. Its nest is built of coarse grass and
reeds, plastered inside with mud and lined with grasses, most commonly
found in orchard trees, shrubs or buildings. The eggs, laid
in a clutch of four to five, are a uniform greenish blue. Two or
three broods are raised each year.

Colonists named the robin after European birds of similar appearance


The Varied Thrush of the Pacific coast is similar to the Robin,
but has a dark breast band.


The European robin is technically a chat thrush, not a true thrush.
The plump body is about about 5.5 in long; its general color is
olive-brown, with a characteristic reddish-orange breast.

In western Europe, the equivalent of the American robin is the
Eurasian blackbird, in which the male is all black with a yellow bill
and the female is dull brown. Its song and calls are quite similar. 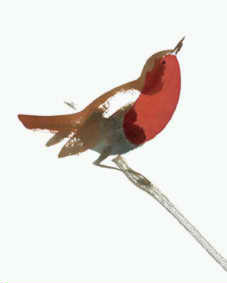 Robins belong to the family of Thrushes and the order Passeriformes.


Types of Robins include:

Listing of All Perching Birds