Please Help Pets with a Small Gift of One Dollar

Disorders that are related to Feline Vaccinations
By: Alfred

If this disease is contracted your cat will die in matter of
days. This disease seems to closely resemble late stage AIDS
in human beings. Autoimmune hemolytic anemia can be a
complication in ANY feline vaccination.

Dr Denis W Macey was reported in an American veterinary
paper as saying that up to 22,000 cats develop cancer at the
site of vaccination every year in the USA. American cats are
now often being vaccinated in the tail or leg so that they
can cut that body part off if it becomes cancerous.


SV40 (a cancer) was discovered in the kidney cells of
macaques that were used to culture the polio virus for
vaccines in the early `60's. This indicates that an infected
vaccine could spread cancer.

A bird retrovirus that produces symptoms like leukemia has
also been found at human cancer sites and is suspected to
have come from the MMR vaccine. Hamsters, dogs' kidneys and
brains, ducks, kidneys from monkeys, chick embryos, and the
brains and kidneys of cats are all commonly used as culture
mediums for vaccines. If the animal used as a culture medium
carries its own species-specific retrovirus and this is
undetected and left in the vaccine, the vaccine could
permanently alter the genes of the animal or human to whom
the vaccine is administered.

Dr Larry Glickman at Purdue University found that dogs that
are routinely vaccinated (usually yearly) develop auto-
antibodies to a wide range of their own biochemicals,
including DNA. The significance of this study is immense. It
means that vaccines can cause genetic defects.

Thyroid disease can be caused by vaccines, and can then
become an inheritable condition. If a cat has underlying
thyroid disease, it only needs a trigger from a vaccine, an
environmental pollutant, from stress, or from dietary
inadequacies to develop life-threatening autoimmune
diseases.

Yes, parvovirus was created by vaccines. Parvovirus didn't
exist before the 1970s. In fact, scientists tell us it was
created by vaccine manufacturers who cultured the distemper
vaccine on cat kidneys that were infected with feline
enteritis. This mixed-disease distemper vaccine was then
injected into dogs around the world, and parvovirus suddenly
appeared all over the world at the same time, unlike the way
a naturally occurring disease would have spread. Parvovirus
appeared all at once right in schedule with the distribution
policies of the international vaccine company, and most
likely is a blending and mutation of the two viruses.

There are numerous scientific studies linking arthritis with
vaccination. Vaccine components have even been isolated in
the bones of arthritis sufferers post-vaccination.

There are many, many research papers showing a link between
allergies and vaccines. Animals with a genetic
predisposition to allergies can become more allergic, or
become highly sensitized, when foreign proteins such as the
serums and organ tissue contained in vaccines are injected
into them. Many people and animals have been reported to
have developed new allergies shortly after they were
vaccinated.

Veterinary manuals warn about serum reactions, and vaccines
are made using serum. A serum reaction is simply an allergic
reaction to foreign blood products that have been injected
into the blood stream. A serum reaction can be fatal.
Recently the British government ordered the withdrawal of
polio vaccines that contained bovine serum because of the
risk of BSE.

In 1983, Frick and Brooks published a paper to show that
inhalant allergies such as atopic dermatitis have developed
in dogs when vaccinated with hepatitis, distemper, and
leptospirosis vaccines just before exposure to pollen
extracts. In other words, vaccines can trigger allergies in
animals with a genetic predisposition.

The Merck Manual states that encephalitis (brain
inflammation) can be caused by vaccines. It also describes
epilepsy as a symptom of encephalitis. 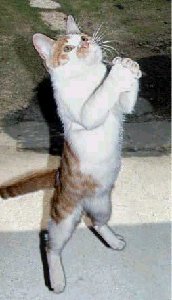 Discover more about the Ultimate in Kitty Food