Experiments with the Model Y tractor paved the way for the
John Deere Model 62 Tractor. The Model Y showed that it had some
good possibilities for small acreage farmers and had done well
in field tests.


Deere decided to go ahead with the Model Y, only with some upgrades
and a new name, the Model 62, plus a line of equipment to go with it.


The Ford transmission was replaced with a new 3 speed transaxle
that had the transmission and differential as one unit. This allowed
the Model 62 to be fitted with a belt pulley which could be driven
by the driveshaft. The belt pulley attachment was an option.


A casting was used on the front end with the JD logo in the cast.
This casting also helped make the front end stronger and gave
some mounting points for the engine.

The Hercules NXA engine that was on the Model Y was retained,
only mounted level. On the Y it had been mounted with a slight
upward tilt. 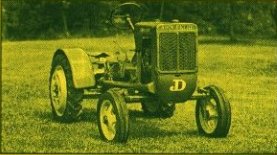 Production of the Model 62 began in March 1937. The John Deere
Model G was also introduced that year.

The serial number plate was located on the rear axle housing. Model 62
tractors had the JD logo cast in both the front and rear housings.

Back to John Deere Y Tractor


Return to: History of John Deeres