Bobolinks are small, short-tailed blackbirds with short,
conical bills. The male’s breeding plumage is unique:
black under parts and face, with white on the rump and lower back.


There are large white patches at the shoulders and buffy
yellow on the back of the head and nape. The tail is black
with sharply pointed feathers. Wings are black, showing buffy
feather edges in fresh plumage. The bill is black during the
breeding season and pinkish during the rest of the year.

Males molt into a female-like plumage after the nesting season.

Females are colored with striped head and streaked
upperparts. The under parts are plain buff with darker
streaks at the flanks. The large size, prominent pale
central crown stripe, and pink bill of the female is
useful in distinguishing it from similar plain-breasted
sparrows.


Bobolinks can be found in Open fields, especially
hayfields and wet meadows, during migration, can also
be found in marshes.


Bobolinks nest on the ground in slight depressions formed
at the base of a clump of grass. The nests consist of course
grasses and weed stems lined with finer grasses.


Three to seven eggs are usually laid per nest. Eggs are Bluish
gray or pale reddish brown, with irregular dark spots and blotches.

An intriguing aspect of Bobolink nesting behavior is that
sometimes more than two adults will feed the young at a
single nest. This phenomenon, known as cooperative breeding
is rare among long-distance migrants. The "extra" adult
at the nest--the so-called helper--can be either male or female. 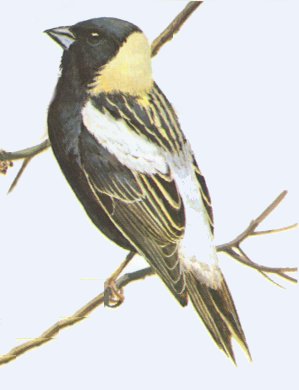 Other North American members of the blackbird family include