Cowbirds are the smallest of the blackbird family and the only
one with a brown head, they often live in huge flocks.

Cowbirds walk when feeding and hold their tails higher than
other blackbirds.

Cowbirds with the widest range are the North American
brown-headed cowbird, which gave the name cowbird to
the group. It originally followed bison on the plains, eating
insects stirred up by the moving animals, and
later transferred to domestic cattle, where they are often seen
perched on the head or backs of cattle.


About 8 inches long, the male has a glossy black body and
a brown head; the smaller female is brownish gray.

Eggs are usually laid in already made nests of other birds. They
lay from 4 to 5 white or bluish eggs heavily speckled with gray
or brown. Eggs hatch in 10 days. Mothers of other species will
often raise the hatched cowbirds as their own. 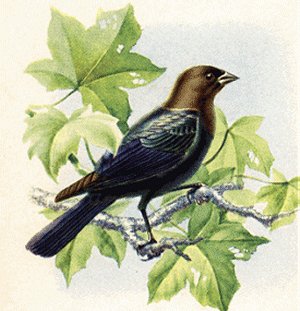 Cowbirds belong to the family of blackbirds and the order Passeriformes.


Other North American members of the blackbird family include

You will Cherish these Adorable Stuffed Plush Birds