Christmas wouldn't be the Same without Rabbits
By: Tippy & Alfred


You wouldn't think that rabbits would be a Christmas icon
but more and more they have become such. You can see bunnies
frolicking in the snow on ornaments, figurines, clothing,
statuary and other decorations. The snow bunny in particular
has become a popular Christmas icon.

Rabbits are a part of the family Leporidae. There are
several different species of rabbit found all over the
world. They live between four and twenty years. In the
winter they are harder to find and usually eat only scrub,
bark and what they are able to find as far as greenery,
usually at night. They do not hibernate over the winter like
some mammals, so what most likely made them into a popular
Christmas icon is that they are active during this time of
year, unlike a lot of other animals. They are hunted during
the winter months as well and you can see rabbit gracing the
table of the Christmas feast at some families' celebrations.


Some rabbits grow a winter coat that is colored more like
their winter surroundings. The Snowshoe Hare is one example
of this. In summer it is brown or grey, but in winter it is
snow white. This is a form of camouflage so that they have a
better chance of surviving until the next spring. Their hide
is especially wanted during the winter months to make
clothing because of its thick, soft fur.

Rabbits are cute and cuddly; you can often find them on
Christmas decorations - often sporting a Santa hat, candy
cane or some other Christmas decoration. You can find them
printed on clothing, sharing the holiday spirit. They are
also depicted in books about the Christmas holiday like
"Little Rabbit's Christmas" by Harry Horse. There is also
another holiday favorite "The Velveteen Rabbit" by Margery
Williams.

A popular rabbit is "Rabbit," depicted in "Winnie the Pooh"
and which has been included in multiple Christmas specials
and movies. The "Brer Rabbit's Christmas Carol" is a popular
movie depicting a rabbit in Charles Dickens' famous "The
Christmas Carol."

The rabbit may not be the first animal you think of when it
comes to Christmas, but even now they are becoming a popular
icon for this particular holiday. Much like the teddy bear
or the puppy dog the rabbit may be what you think of next
year when you get that special someone a gift for Christmas.
After all there is always room for another special animal in
one's heart. 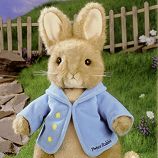