The official State Bird of Maryland: the Baltimore Oriole


All North American Orioles have typically the same pattern.....

Adult Oriole males and most first year males are strikingly marked with
brilliant breasts, bellies, and rump patches that contrast with
black wings, black throats or heads, and in many a black rounded
tail. Most females are similar to one another.

All have conspicuous wing bars and very sharp pointed beaks.


The adult male Baltimore oriole is 7 to 8 inches long with a
brilliant orange stomach and chest, a glossy black head, throat,
back, and wings, and white wing bars. These colors, are not assumed
until the male's second year. The female, which is slightly smaller
and much less colorful, is yellowish orange with grayish wing bars.

The Baltimore oriole lives in open woodland, suburban areas, and
parks, and feeds on insects, fruit, and nectar. It has a fairly long,
sharp beak that allows it to feed from hummingbird feeders.


A migratory species, the Baltimore oriole arrives in the United States
during the spring to breed, and returns to the tropics of Mexico, Central,
and South America in the fall. The male courts the female with a
display that consists of bowing, spreading the tail, and raising the wings.

The male and female build a hanging, pendant-shaped nest out of grass,
strips of bark, vegetable matter, and artificial items like string. The
nest is woven around the tip of a branch with one opening in the top.
The female lays and cares for the four or five bluish-white eggs. Both
parents bring food to the young and continue to feed them even after
the young have left the nest, two weeks after hatching.


The Baltimore oriole and the Bullock's oriole were thought to be separate
species until it was discovered that they interbreed where their ranges
meet in the Great Plains of North America. Consequently, from 1973
to the mid-1990s, the Baltimore oriole and Bullock's oriole were
classified as two subspecies of the same species, the northern oriole.

American orioles are of a different genus than the orioles of Eurasia.
American Orioles are members of the blackbird family, Eurasian orioles
are not.


The Baltimore oriole is the state bird of Maryland.
The bird was named after George Calvert, 1st Baron of Baltimore, whose
servant's colors were the same as the bird. 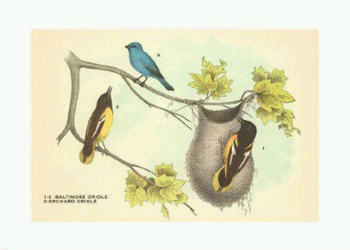 Orioles belong to the family of blackbirds and the order Passeriformes.


Types of Orioles include:


Other North American members of the blackbird family include 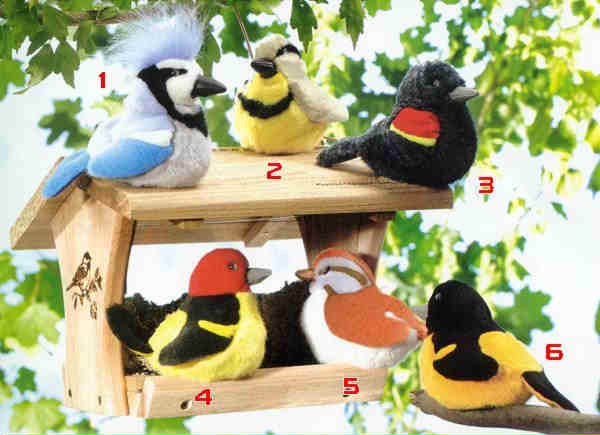