Birds are grouped into orders, families, and genera
according to similarities of bills, feet and wing forms.

Classification also refers to body parts not important in
field identification, but essential in scientific study.


Here is a simplified list of the main bird groups.


Herons, Bitterns:
Long legged wading birds. In flight, feet extend beyond tail
but neck is pulled in. Bill straight and sharp; skin between eye
and bill bare. Four toes; scarcely webbed or not webbed at all.
Middle toenail has comb like margin.


Cranes, Rails, Coots
Marsh birds flying with neck extended and feet dangling; wings
rounded. Four toes, unwebbed (except for coot, which has lobes).
Middle toenail without comb like margin. Patch between eye and
bill is feathered.


Pigeons, Doves
Small headed birds with slender bills, grooved at base; and with
nostrils opening through a bare fleshy area at base of bill. Legs
short; four toes; all on same level; hind toe as long as shortest
front one.


Owls
Bill strongly hooked; a swelling at its base is concealed by
feathers. Toes with large curved claws; entire leg feathered. Eyes large
and immovable in puffy, feathered face.


Swifts
Small swallow like birds; bill small with no bristles at base.
Mouth wide; wings slender and very long, reaching beyond tail; tail
with 10 feathers.


Hummingbirds
Tiny birds with bill slender and needle like, longer than head.
Feet small and weak. Feathers on back usually shiny green.


Kingfishers
Head large and crested. Bill long and strong, pointed. Feet
small and weak; four toes; 2 of the 3 forward toes joined
for half their length.


Woodpeckers
Climbing birds with strong, pointed bill, with bristles at
nostril. Tail feathers stiff and pointed. Four toes; 2 in front,
2 in back or (rarely) 3; 2 in front and 1 in back.


See More about Perching Birds Below 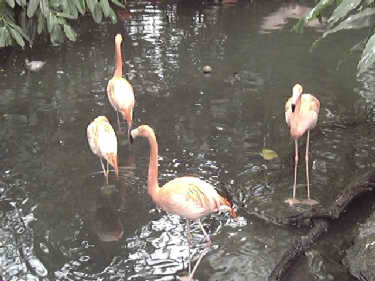 Perching Birds are medium to small land birds with feet
well suited for perching, 3 toes in front and one long one behind.

Most are fine singers.
Most are highly migratory.


Perching birds range in size from kinglets at about 0.18 oz to ravens
at about 3 lb.

Oscines, commonly referred to as songbirds, comprise the
suborder Passeres, the largest suborder of the passerines.
Finches, wrens, swallows, nightingales, crows, warblers,
vireos, tanagers, and flycatchers are all passerines.


Passerine is the common name for these perching birds belonging
to the largest avian order, which includes more than 5700
diverse species and over half of all living birds.

Passerines make up the order Passeriformes.


Birds make up the class Aves